In the bright lights, big city of our capital two young women struggle to find their way 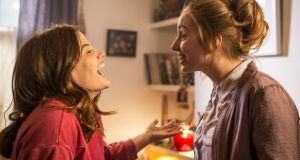 Can’t Cope Won’t Cope cuts a little too close to the bone for this fellow Aisling settling into life in the big smoke.

Stefanie Preissner has captured the trials and tribulations of a twentysomething woman grappling with life in the capital city with such accuracy that it is at times like looking at a mirror image of your own world. And that is not always easy.

Some details are obvious: the smoking area in Coppers, the photo keyring from Flannerys, the walking shoes tucked under the desk. While others are less so – the overreliance on the best friend from home, the worried mammy, struggles to pay rent and the search for a fulfilling career in a place far away from home supports.

We are beginning to get a sense that the main character Aisling really is struggling to hold it all together.

She is great craic, clearly a smart woman working at an investment company; fiercely loyal to her best friend Danielle and has men falling at her feet.

From outside looking in you might think she is coping just grand. But the reality is quite the opposite.

She uses drink as an escape from her reality and doesn’t slow down to think about the effect it is having on her life – from work and relationships to friends and family.

There is no doubt she has a great time doing so, but is the perpetual hangover worth the high?

In the first instalment we saw her visit the pharmacist for emergency contraception, after she had woken up beside her boss’s brother following one of many messy nights in Coppers.

Nothing ground-breaking about that, but her reaction to the pharmacist’s questioning of her overuse of the morning-after pill said it all. “I’m not that kind of girl, like, I don’t sleep around!”

When faced with the actuality of her decisions in the cold light of day she’s not so sure she likes what she sees.

This is where the distinction between country mouse and town mouse becomes more pronounced. Aisling has no choice but to move out of home young, and is thrown into a big city miles away from parents and prying eyes before she has established a really solid sense of self.

In this world, casual sex is tested on a trial and error basis.

It is much more acceptable and accessible than it is for those living at home in Dublin, who might not be so keen to meet their mother at the bottom of the stairs with their handsome stranger in tow.

This newfound independence throws up all sorts of moral problems for Aisling.

Her ability to bury those insecurities in a sea of vodka and tequila may seem a little far-fetched, but as young women I think we have all either been in those shoes or witnessed someone who has.

There is a foreboding sense that her act will only last for so long before something gives – and in this latest episode, her boss’s words of “Jesus Aisling, get your shit together” are still ringing in my ears.

Meanwhile, things are beginning to go south for her best friend Danielle, who might just be realising that this friendship is more like a toxic relationship than a mutually appreciative one.

Danielle is constantly called upon when Aisling is bored on a night out, only to be left as a spare part when her partner in crime finds the shift.

We have all been on both sides of that divide before, but is this beginning to swing too much in Aisling’s favour?

Similarly, Aisling is annoyed with Danielle for letting slip company secrets to an American client in a haze of drink.

What seemed like a solid and equal friendship at the start is beginning to show its cracks as more of a toxic co-dependency and time will tell how the pair deal with that inevitable fall out.

Every theme and storyline, character and setting in this series is so close to reality I feel it could have been a biography of any number of young women in Dublin today.

So far it has dealt with so many underdiscussed issues for our generation who have been mired with the buzz words like “Generation Snowflake” and “adult-children” for too long now.

It shows the difficulties of sustaining friendships and making new ones, of finding your feet in a career path while trying to enjoy your youth at the same time.

It explains the complexities of love and sex as well as the many challenges of adapting to life outside of home – from paying rent to being without family support.

I dare you to call us “infantilised” after watching this.