‘Breaking Bad’ props up for auction on new website 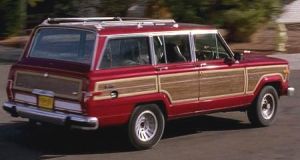 A 1991 Jeep Grand Wagoneer driven by Skyler White in “Breaking Bad” is among the props being sold on the new website Screenbid.com 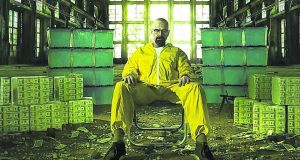 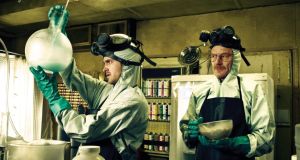 If your idea of living the dream involves banging around the desert in a Pontiac Aztek that has seen better days, the dream just got closer.

Screenbid.com, an auction site focused on the sale of movie and television props, has gone live today with a preview of its first offerings: about 250 items from hit television series “Breaking Bad” , including a dull green Aztek that was used, and abused, by the show’s meth-dealing anti-hero, Walter White.

“We have Walt’s Aztek and the Monte Carlo,” along with other paraphernalia, said Bill Block, a film producer who is joining entrepreneur Jeffrey A Dash in founding Screenbid. The site, they said, is intended to help studios dispose of props systematically and profitably - props that might otherwise be locked in storage or offered more haphazardly on eBay or Craigslist, sometimes by individuals who simply walked them off a set.

The “Breaking Bad” auction, they said, was organized with Sony Pictures Entertainment, whose television unit helped produce the show. According to Block and Dash, who spoke by telephone earlier this week, the auction will begin Sept. 29, when the last episode of the series is shown. (Some items will not be listed until then, to protect plot points.) Sony, they said, has set an undisclosed reserve price on items, which will be withheld if the price is not met.

The price of Hollywood collectibles is notoriously elastic - who’d have figured on the $5,000 bid for 12 cans of beer at the “Lost” auction, run by Profiles in History? But Block reckoned that the “Breaking Bad” props could yield more than $2 million.

Sony Pictures, the new site’s founders said, is already in line with a second auction, which will sell memorabilia from its film “This Is the End,” including furnishings from the movie’s version of James Franco’s home. Props and other items on Screenbid, they added, are authenticated by the studio or producers and artists involved with the sale.

But Sony is not selling White’s mobile meth lab, a Fleetwood Bounder RV, Block said. “They’re keeping it for their on-the-lot tour,” he explained.