‘Beyond: Two Souls’ is a videogame with an epic story, big production values, the acting skills of Ellen Page and Willem Dafoe, and moral quandaries for players. It’s a long way from ‘Super Mario Brothers’ 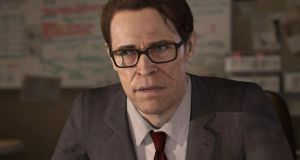 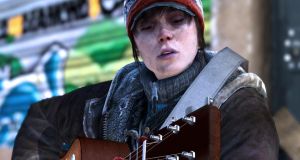 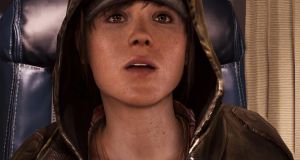 ‘When you play Beyond, you won’t see Ellen Page playing a role, you will see Jodie Holmes, because she gives her flesh, bones and soul’ 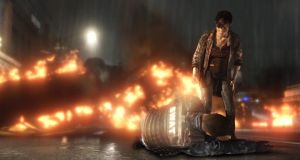 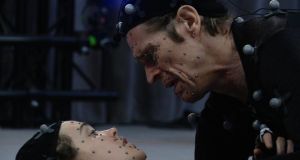 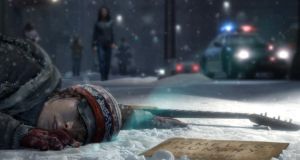 It’s always strange to see the difference between behind-the-scenes footage and the finished product. Whether you’re watching an action hero carried by wires across a green screen, actors rehearsing in everyday clothes or a mime on a smoke break, the result is startling.

Quantic Dream makes stylish, beautifully realised computer games and is based in an innocuous, redbrick building in an obscure corner of Paris. The inside isn’t much more glamorous, with two floors of staff glued to keyboards and monitors, a small, neat canteen, and a motion capture (“mo-cap”) studio.

The latter is the first clue that this is not a normal IT company. Images of Ellen Page staring from a number of screens give another hint. Later, I walk past a calendar that has a month marked off in red for “Willem” – Page’s co-star in Beyond, Willem Dafoe.

Motion capture is the method of covering actors and objects in almost countless dots and spheres, and then using that footage as building blocks for realistic graphic rendering. Andy Serkis is the best-known advocate, having used the method to create Gollum in Lord of the Rings, but you’ll also have seen it in sport games (Rory McIlroy donned the mo-cap suit for his game appearances), conventional animation, and just about any blockbuster movie released this year.

Motion capture
The Quantic Dream motion-capture room looks like a school gym at first glance, with grey padded walls, doors and floor. The walls have metal frames for mo-cap cameras. Visiting journalists are shown footage of Page and Dafoe wearing scuba-style costumes with white balls on their limbs, and donning make-up with dozens of dots on their faces. Some are handed props that the actors use: weighty, metal, authentic-looking machine guns sprinkled with dots of their own.

The game in question is Beyond: Two Souls. It tells a decades-spanning story of Jodie Holmes, a heroic but tragic young woman played by Page. Jodie has an unseen paranormal companion who is tethered to her for life, working as both a burden and guardian. We follow Jodie’s life from childhood through to young adulthood as she helps strangers, becomes a fugitive and tries to come to terms with her condition. Dafoe plays a sympathetic counsellor.

David Cage, the writer and director of Beyond, describes the casting process. “Ellen and Willem got involved in a simple way: I wrote the script and I thought that they would be fantastic in the roles. We contacted their agents in Hollywood and said: ‘This is who we are and this is what we do. We just did Heavy Rain, and we’re working on this exciting new project. Do you think you could be interested in this?’ So we met, talked about the script and characters, rehearsed together, and worked together.

“It was an amazing process; working with such talents is something very exciting and very challenging. You want them to feel comfortable and . . . for them to be proud of what we do with their performance. So it’s extra pressure, but good pressure.”

Game development brings different challenges to animation or film-making. For a start, the story is non-linear. With multiple plot strands and characters moving according to the gamers’ whims, performers have to act out several outcomes in diverse ways, from the major (filming numerous endings to some scenes) to the minor (performing a variety of walks, say).

Casting Ellen Page
Caroline Marshall, the lead gameplay designer, was on-hand to help actors with the motion capture. “Actions depend on the context. Jodie doesn’t do the same thing twice,” she says. “[The cast] got pretty comfortable with that very early. At first they thought it was weird to be in this suit, and to be shot in every direction is very different from cinema. But it’s like theatre.”

Cage insists that Page wasn’t just cast for star power: “I was interested in Ellen not because of the fame or to have a nice name on the pack, but because she’s a fantastic actress. That was the only motivation. You can’t ignore that she’s famous and people like her, and that will generate buzz around the game. That’s great, but that was really not the initial goal. She brings something unique to the experience.

“When you play Beyond, you won’t see Ellen Page playing a role, you will see Jodie Holmes, because she gives her flesh and bones and soul. And very few actresses would have been capable of doing what she did.”

Like the multimillion-selling Heavy Rain, Beyond is a cinematic, third-person action game, with its share of moral quandaries unique to interactive entertainment. “There are many moral dilemmas that the player will be confronted with,” says Cage. “That’s part of the experience.”

Gamers, of course, also have a say in the outcome of the story and how the characters behave. “Yeah that’s definitely one of the advantages [over other mediums],” he says, “The main advantage we have over film is that we can put the players in the shoes of the characters and really make them the co-writer and co-actor of the experience. The player is not just watching a story that we tell, but they’re a part of it and change it with his choices.”

Would he ever make a movie or TV series? Cage shakes his head: “I think it’s a different job. It looks similar because we have actors and script. But it’s very different, and I’m not a frustrated film-maker. I’m happy to be here. I choose to be here. And I still have so much to discover and learn in this medium.”

Quantic Dream is a rare game studio that tries to win over new audiences for games with relatable characters and relatively simple controls, while simultaneously trying to move the medium forward: Heavy Rain and Beyond are technical marvels that attempt more sophisticated, ambiguous stories than their competitors. But the idea of making more complex games for newcomers and hardcore gamers seems like an oxymoron.

Speaking to non-gamers
Guillaume de Fondaumière is co-chief executive of Quantic Dream, and he concedes that games are still a hard sell to some consumers. “It’s not that easy, because most people have a preconceived idea of what a game is,” he says. “There’s a pretty good reason for that. To be honest, I think that a lot of games are, if not all the same, at least easy to categorise – shoot-’em-ups, RTS [real-time strategy] – we are an industry talking to a niche audience. The amount of people playing has increased but I still think it’s not totally mainstream.

“So the [goal] is to tell people about the differences that exist between our game and the rest of the industry, and also to tell them why it’s something that could interest them. A lot of people think that games are not for them because they’re intimidated – by a controller, for instance, or because they don’t feel any acquaintance with the technology. We have to convince them that they’re accessible and that they’ll be able to forget about the technology and delve into the content, the story; the same way that they don’t need to know the technology of a movie to enjoy the story, and enjoy what’s on screen.”

Beyond: Two Souls will be released for Playstation 3 in October