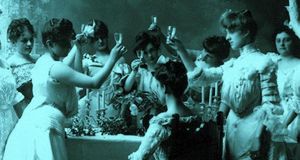 The traditional end of the festive season is Nollaig na mBan, when women were allowed to take a rest while the men of the household would crack into action. We’ve never seen any actual evidence of this taking place, so why not celebrate it in proper fashion at the Irish Writers Centre instead?

On Tuesday, the centre, along with the Women’s Museum of Ireland and The Anti Room, is hosting Nollaig na mBan with panelists Tara Flynn, Louise O’Neill, Lisa Coen along with Una Mullally, Claire Hennessy, Róisín Agnew and Deirdre Sullivan.

On the night you can expect discussions on the unstoppable force of confessional writing and the rise of the female essayist. There will be a Bare Your Souls soapbox packed to the gills with revelations (each guest has just two minutes; expect hips to be shot straight from). There will also be a Kris Kindle, where the organisers are asking people to bring along a  much-loved book by a female writer, wrap it in newspaper and tag it with a three-word description. Everyone gets to take away a thing of literary beauty.

Things kick off at 8pm sharp, and entry is €10 with a complementary drink. Tickets are from eventbrite.ie. Go on and start the New Year with a heartwarming evening of banter and brilliance.

2015 is the 200th anniversary of the birth of mathematical genius George Boole, whose work underlies the fabric of today’s digital world. Boole was a professor at what is now UCC from 1849, and one of the events marking his life is Marie Foley’s cumulative, changing exhibition, Aesthetic Logic (right). Can Boole’s rigorous “laws of thought” hold sway in aesthetics? This year Foley and curator Jobst Graeve explore the question.

Na Píobairí Uilleann’s monthly concert series is now a stalwart of the traditional calendar. Tonight’s quartet of Lambe, Fox, Byrne and Piggott promise to shake up their individual repertoires with a compelling mix of pipes, concertina, fiddle and accordion.

Tony Slattery: Something happened when I was very young. A priest. I was eight
5

Radical Wordsworth: Focusing on the ‘spots of time’ of poet’s greatest work
10