Learn from your family, don’t be precious, live in a world of your own, and doughnuts are good for keeping contacts sweet: just some of the ideas thrown up by Dublin’s creative festival

Offset 2014 begins today. The creative festival will see speakers from around the world sharing experience and lending advice to a sold out audience.

Dublin's Camden St saw the first happening of 'Transform Your City’. A platform to showcase the great creativity the city in the run up to Offset. 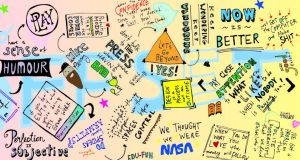 1 Find an authentic voice
In his Offset presentation, Jeff Greenspan speaks movingly and wittily about how crucial it is to find an authentic voice. “I’ve been in professional adverting for about 17 years; nearly all of those against my will,” he tells the packed Bord Gáis Energy Theatre in Dublin. “What’s kept me interested is my side projects, and they help me deal with my fear.”

The turning point was when he was held up at gunpoint: “I’d highly recommend it.” Realising that life is pretty short, Greenspan came out, and also started making those side projects his main work. “I was speaking in society’s voice and that really diminished you. Find our own authentic voice and speak with it very loudly.”

Malcolm London, a Chicago-based poet, elegantly picked up on this point during a cameo appearance in Maser’s presentation: “The richest man in the world can never purchase yesterday; it’s never too late to love yourself enough to purchase a new beginning.”

Brown Bag Films took the difficult decision to jettison its advertising department, worth 50 per cent of its turnover, to focus on producing children’s animations. Now it is Europe’s most successful creative-led animation studio. Its success is down to “concentrating on your audience, not on making something for producers or tax breaks”.

2 Create a world
Jon Burgerman points out that, as illustrators, “we fashion a little world around us that’s totally believable. Create your own world for others to engage with.” He describes how his niece had stickers of various characters he had drawn, and invented names and characteristics for all of them.

3 Ambition doesn’t have to match resources
No story illustrates this better at Offset than the presentation by Brown Bag’s Cathal Gaffney and Darragh O’Connell. After being kicked out of college, they started the company with almost no resources.

“We needed a Steadicam so we taped a 16mm camera to a bicycle. We couldn’t afford taxis home from the office, so we’d wrap up in carpets and sleep there, like a pair of sausage rolls. Our goal back then was to get paid by the age of 30.”

Showing images of an early animation project, they say: “We filmed it on an old security camera we found lying around the place and recorded it frame by frame on a VCR.” In 1998, “we bought a computer for £30,000. We thought we were Nasa. ”

In 2012, Mike Perry took over a crumbling warehouse in Brooklyn. “A Manhattan gallery space would have cost me $8,000 per night; I got this place for $7,000 per month.” A Kickstarter campaign gave him the funds to get the Wandering Around Wondering community exhibition off the ground. More importantly, when he started the campaign, people began volunteering to work on the project. “The power [with Kickstarter] comes from volunteers,” he says. “It immediately builds a community. It’s not about raising money; it’s about raising a community.”

Usually as artists, he says “we’re behind closed door or we’re upstairs hiding. Here, we had huge open garage doors.” This interaction with the community and the audience was the project’s biggest success.

Marina Willer from design powerhouse Pentagram picks up on this on a more immediate level. When it comes to modern graphic design, “logos don’t do much any more”, she says. “Everything has to be about involvement.”

5 Share the work
Jon Burgerman has a few rules for his output. “One: take the work into the world. Two: share the work. Three: use whatever medium is necessary.” He insists “the only way to test is to try”, meaning to release work and not be too precious about it.

6 Learn from failure
An event at Dublin’s Science Gallery looked at how failure can be a positive. Speaking at the event, Conor Nolan of Conor &#38; David rails against what is known as “the common approach”, which is where designers get a brief and then “disappear off into your own design cave”. His advice is to “engage with your clients from very early on and throughout the process. The more you fail with the client, the closer you will become.” He also advises working on “more than one solution, not just the one you think works”.

Marie Redmond, founder of X Communications and now a lecturer in Trinity College Dublin, uses the example of James Joyce’s notebooks to illustrate the point. She got access to the original notebooks for Ulysses and noticed that Joyce had used a colour system to identify words and phrases he would use in an “incredibly intricate process of editing and sampling”. If Joyce can afford to try and fail, so can you.

7 Think outside the box
It’s the hoariest of cliches, but it comes up again and again in various Offset talks. Stylist Aisling Farinella picks one of her favourite photos, and says that everything is wrong with the styling, but it still works: “The oddness involved is what makes this image: the dress is backwards, the wig is lopsided and she’s wearing odd earrings.”

Johnny Winslade and Ollie Munden from I Love Dust give one of the slickest presentations at Offset, but aren’t above bringing up the dreaded box. When casting around for ideas for an annual Christmas mailout to their clients, they decided to ditch it altogether in favour of sending out a Valentine’s Day treat. Their Black Valentine’s Day box of doughnuts had black icing, came in suitably dark styling, and contained flavours such as Veronica’s Heart, Voodoo Doll and Harlem Candy. Coasters and coffee mugs sealed the deal, advising clients that “Coffee is for closers”.

Richard Turley makes frequent reference in his talk to “biting the hand that feeds”. As the creative director at Bloomberg Businessweek magazine in New York, he moves in an ultra corporate world, but, as a Brit, with his design he can “attack America in a way that others who live there can’t”. His magazine’s front covers frequently rip into the corporate suits that are almost exclusively Bloomberg’s clients, yet it works. “Always push things; never settle down,” he says. “I have a real problem with the Apple-isation of design. It’s too polite.”

8 Inspirational family life
Just because you have a family doesn’t mean your career is over, and it’s even a fertile ground for inspiration. Marina Willer of Pentagram describes how her home country of Brazil and its chaos has inspired the aesthetics of her work: “It’s not practical, it’s about enjoying the ride.” This chaos has spilled into her own life, especially as she has twins. “I’ve never downloaded an app. I’ve no idea what Foursquare is. My life is total chaos. I’m forever using my house keys in the Tube and my Tube card in my front door.”

She is convinced that mainstream school education “kills creativity”, and her children’s linguistic sideswipes have influenced her work, including their “strangled eggs, ghost cheese and soiled milk”. Then there are their hilarious, often existential questions: “What happens if you don’t have a skeleton? Do spiders have armpits? Is it dark inside me? Why did you didn’t?”


This phrase comes from a poster above one of the workstations in the early days of Brown Bag, and it’s still something they stick to. “It’ll do. Perfection is subjective. Know when to move on.” Endless tinkering may not improve a project and often wastes valuable time.

Jon Burgerman is similarly blasé: “It’s okay to not really know what you’re doing (unless you’re flying an aeroplane).”

In his charming talk, illustrator Chris Judge describes how he’d he struggled for years to get a good picture book together before realising what the problem was: “I didn’t have a story.” To illustrate the point he shows some of his projects that have never made it into print, including: The Terrible Librarian ; Ernest Onion Head ; and The Girl Who Couldn’t Smile .

10 Speed thrills
Several of the I Love Dust projects have one astonishing factor in common: speed. A stunning mural for Karl Lagerfeld was “started at lunchtime and finished by midnight”. And a series of designs for Nike&#8217;s Jordan Brand, produced even though they didn’t get the gig, was ripped out in just three days.