Nigella’s battles moved to the kitchen, in ‘The Taste’, while infidelity between commuters made for charming drama in ‘The 7.39’ 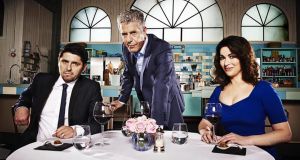 Ready, steady, bicker: Ludo Lefebvre, Anthony Bourdain and Nigella Lawson are the judges on The Taste

If The Taste (Channel 4, Tuesday) proves a hit for Nigella Lawson, it will be a case of revenge being a dish best served with a spoon. In the new cook-off – the UK version of a US hit – she and two fellow judges choose the finalists blind on the basis of a single spoonful of their cooking. A bit like The Voice with a drizzle of Masterchef and a sprinkling of The X Factor (but without the dead granny/dog/leg sob stories).

The bickering trio played to their public personas: Lawson, all flawless make-up and winning smiles, looked fabulous and purred about the food being “seductive” and “a sinful gratification”; the magnificently cranky French chef Ludo Lefebvre laid the accent on thick – I thought he had a spoonful of dog, but it was duck – while the American star chef Anthony Bourdain did his alpha-male stuff, a swaggering fighter versus the picky Frenchman, with Lawson as a fantasy mammy in the middle.

When an 18-year-old contestant was told he hadn’t got through (his chutney was too sweet – the shame) he burst into tears. Lawson hunkered down to comfort him while the poor lad covered his teary face, either out of mortification or to avoid gawping down her cleavage. Bourdain’s reaction to the touching scene? “Toughen the f*** up.”

Of the 12 who got through the first round only Barry Johnston, a Ballinasloe man, had all the judges vying to be his mentor. He chose his hero Bourdain, admitting his friends “would kill him for not picking Nigella”. Incidentally, this was filmed before Lawson’s recent courtroom dramas, so anyone tuning in to see how she’s bearing up after all that public rummaging around in her private life will be disappointed.

The writer David Nicholls’s drama The 7.39 (BBC One, Monday and Tuesday) was just the thing for a dreary January evening; a couple of soppy pop songs swelling in the background and it could have been a Richard Curtis film. It was a familiar story: Carl (David Morrissey) is a middle-aged man who comes to the “is this it?” point in his life: greying beard, tidy suburban life, nice wife, teenage kids who mostly ignore him, boring career and an obsession with the dishwasher, and the next thing he knows he’s having it away with Sally (Sheridan Smith), the fit young blonde he meets on his daily commute to Paddington. She, meanwhile, is reluctantly about to marry her control-freak fiance and is new to the hellish commute because of a recent move to the ’burbs; “a long way to go for an extra bedroom and some decking”, she tells Carl in their flirty phase.

It was a charming chick-lit drama with echoes of David Lean’s classic movie Brief Encounter, in which two people meet on a train and fall in love but are doomed never to be together. Duty prevented them from ending up, as Sally and Carl regularly did, in a cheerless hotel room with nasty curtains and shiny pine furniture for an energetic bout of infidelity.

Nicholls captured the repetitive slog of everyday life, and the top-notch, nuanced performances, especially from Morrissey and Smith as the off-side couple and Olivia Colman and Sean Maguire as their blameless partners, made up for the predictability of the storyline. It ended well, and that’s not a spoiler; everyone was so nice and reasonable (except Sally’s gym-bunny fiance, who got very mad) that it couldn’t have wrapped up any other way.

The Bletchley Circle (UTV, Monday), a clever idea for a crime drama, returned with a period-perfect yarn – it’s set in 1953 – about the suspicious murder of a brilliant scientist. The four amateur female sleuths (Anna Maxwell Martin, Rachael Stirling, Sophie Rundle and Julie Graham) – they’re like Scooby-Doo crime-busters; they go everywhere together following clues – are reunited when a colleague from their second World War Bletchley Park code-breaking days is wrongly convicted of murder. It’s a classy piece of work and refreshing to see so many clever women characters in a crime drama solving the puzzle and not laid out on a slab, naked and butchered.

It’s not quite standing in your scanties to be weighed in front of the nation on Operation Transformation (RTÉ One, Tuesday, Wednesday) – the only aspect of this motivational series I can’t stand – but for Play Next Door (RTÉ One, Thursday) the writers Fiona Looney, Patrick McCabe and Deirdre Purcell signed up to expose themselves in another, equally daunting way.

For the ambitious project they agreed to write a site-specific TV play in a month while cameras documented the process before the play is performed by professional actors. For this week’s opener Looney was sent to Thurles, Co Tipperary and given one of the town’s many closed-down pubs as a venue.

Looney’s stage plays have been comedies, but this had to be in response to what she saw and heard from the many locals she spoke to, and it wasn’t an uplifting picture. In her month-long stay – a bout of writer’s block and a rant about the dog poo included – she decided emigration had to be her theme. Her play, Pheasant Island, was a moving, sensitive piece exploring themes of loss, parenthood and growing up in a small town – an artistic response to the economic situation. The actors caught the nuances of the script perfectly, but a TV play shot in real time is an old-fashioned genre, and viewers are so used to high production values in sharply edited dramas that anything less seems stagy and hollow. A filmed performance in the pub before a local audience might have served the project better.