After an intense weekend of wit, wisdom and wet whistles, Mark Graham opts to take a gangster nap 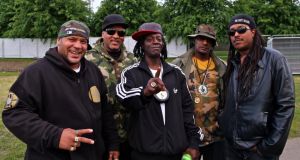 Getting ready to go on the lash at Forbidden Fruit

‘It’s no good trying to analyse a Kerryman, because if you corner a Kerryman, he’ll change his gait in order to generate confusion. You’ve as much chance of getting a straight answer from a Kerryman as you have of gettin’ a goose egg from an Arctic tern.”

John B Keane knew his neighbours. Kerry folk don’t just have a wonderfully earthy and engaging lilt, they’re capable of twisting and distorting language into something as confounding as it can be comforting. Possibly the only place in the world where calling a fella a hoor is actually a compliment.

Other literary festivals can boast a more impressive line-up, but none of them comes close to capturing the atmosphere, camaraderie and craic that flows so smoothly by the Feale.

There is an earthiness to proceedings in Listowel that was perfectly reflected by John Sheahan’s performance at the festival. The audience were rapt by the man who’s head, chin and chops seemed incased in a helmet of white hair. He recited poetry, tickled his whistle, drew deep on his fiddle and peppered his performances with stories of life on the road with The Dubliners.

A poet himself, he spoke appreciatively of Barney ‘Banjo’ McKenna’s ability to twist and transform everyday language. He recalled that between tunes at a gig where payment was unlikely, Barney whispered over to him – “Is this a charity gig or is it fees-able?” The Kerryman is not alone as a gifted sculptor of syntax.

THE CAT LAUGHED Words and storytelling were an unexpected thread running through a weekend of intense festivaling that kicked off in Kilkenny, where Cat Laughs threw an epic 20th birthday bash. This was a marathon of mirth with 21 comedians squashed into a three-and-a-half hour show.

More than 1,300 people sold out The Hub at Cillín Hill; it was reminiscent of livestock marts also held in the large space. Possibly the only venue in the country that smells strongly of cow-shite and Jeyes Fluid, but there’s worse kinds of shite and it proved to be a wonderful night.

Tommy Tiernan tore it apart and stole the show with some intense and painfully funny storytelling, scrying deeply into the Irish psyche with his black mirror. Tommy is capable of verbal chicanery worthy of a seat in the Rose Dome in August – “Ye should have seen her lads, she was gorgeous. She’d make the sausages stand upright in the pan.” Imagine Tommy presenting the Rose of Tralee!? Somebody sort that shit out.

After the gig, the lads extended an invitation to go on the lash in town, but I couldn’t follow. Four days festivalling had taken a toll; just the day before I’d gone for ‘a pint’ in Listowel at lunchtime, only to realise that if you dip your toes in the water of a Listowel pub, they’ll grab you by the leg and pull you right in, whether you’ve brought your togs on or not.

The stories thrown up by a night on the tear with Public Enemy would be the stuff of legend, but being part of a session in the back of John B Keane’s pub, listening to songs you’ve known most of your life, sung by the people who wrote them, felt special. Anyway, Chuck D seemed kinda cranky and nobody in Listowel gave a hoot about what time it was.