Stephen Jones: On My Culture Radar

The actor on Cillian Murphy’s career, why Shane Meadows’ The Virtues is inspiring and his favourite true crime podcast 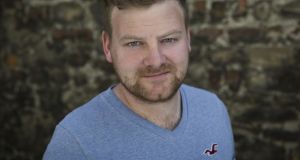 I’m interested in history - I studied it at university - so I’m reading The Vietnam War: An Intimate History by Geoffrey Ward and Ken Burns. It’s the companion piece to the Netflix documentary. Even though I knew about the war, it moves it away from what you see in movies and brings it back to reality by uncovering people’s individual stories, as well as the politics of how America ends up in a disastrous war with this tiny country. I’m hoping to go there later this year.

My favourite is Vermillion in Dublin, an Indian restaurant, mainly because it’s tradition to go there with my partner’s family. It’s got to the point where they know is us in there. I’d usually get the saag paneer or a traditional curry - I don’t mind sticking with dishes I know I like.

It’s often hard for me to see theatre because I’m on stage myself, but I saw an interesting show at Soho Theatre in London called Mouthpiece by Kieran Hurley, a Scottish writer. It’s about a middle-class playwright who’s stopped from taking her own life by a young guy from a rougher part of Edinburgh and they strike up an unusual friendship in which she writes a story based on everything he says. It touches on themes of class and who gets to tell whose story in art.

I’m a big fan of the Manic Street Preachers so I’ll be seeing them in Edinburgh when they play This Is My Truth Tell Me Yours in its entirety. I think it’s a cool premise for a gig. That album has their best anthems in it, like, If You Tolerate This Your Children Will Be Next, a line taken from posters from the Spanish Civil War. The song is about fighting Franco and fascism, so there’s a lot in it that still rings true.

Dublin will always be home but I could also live in Barcelona. I just love the Spanish way of life, the nice wine, good weather, great food. I went when it wasn’t the height of tourist season, so it felt nice and relaxed. I love London too. I’ve had to be over a lot recently because my partner’s working there. I’ve been staying in Brixton, so I enjoy spending time in the Lido and Brockwell Park – the weather’s been great so I can sit with a book and chill out.

I’d love to have a similar career to Cillian Murphy. He does movies, great TV shows and he’s someone who goes back all the time to do theatre. At the same time, I’ve seen him walk around Dublin; he’s not hounded by press or photographers, he’s able to have a normal life.

I like chatty podcasts like the Adam Buxton’s or Joe Rogan’s depending on the guest, but I’m obsessed by true crime. For example, Atlanta Monster is about child murders in Atlanta in the seventies. They put Wayne Williams in prison for it, but the podcast interviews people to find out if he was responsible for all of the murders, or if they were trying to pin them on one person to stop the panic. It’s by Payne Lindsey who also did Up and Vanished, in which he looked into a cold case in his home state of Georgia. That podcast resulted in a person being arrested for the murder.

I try to avoid political stuff on Twitter these days because it can get so heavy, so I’ll choose @scottish_tweets. It’s a collection of funny tweets or videos to do with Scottish people. I like Scottish humour and it’s even better when it’s written in their colloquialisms.

I’ve been watching The Virtues, about a guy, played by Stephen Graham, who’s struggling to keep his life together and decides it’s time to head over to Ireland to confront his demons. The writer and director Shane Meadows said it was based on abuse that happened to him as a kid. It’s dark and heavy-going, but I love Shane Meadows’ work and it’s great to see Irish actors in it. I love that it’s slow moving, it tells the story at its own pace, and it’s not all about the cliffhangers. I’m seeing if my play Northern Lights can flesh out into a TV series, and watching it has been inspiring.