Teaming up to promote Ireland’s art and cultural scene abroad is a win-win for artists, galleries and tourism 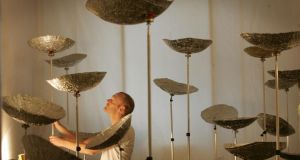 If Dublin Contemporary, which was to have been a quinquennial event, had been a success, we would be looking forward to the next one in 2016. Photograph: Alan Betson / The Irish Times

You could be forgiven for feeling the first stirrings of festival fatigue. From inspiringly brilliant cocktails of the extraordinary and the amazing, to the quirky and niche, to those mixum-gatherum programmes of artists and performers who happen to be on the circuit at the time, it’s a crowded calendar.

If Dublin Contemporary, which was to have been a quinquennial event, had been a success, we would be looking forward to the next one in 2016. To those who were around for the original in 2011, the idea of “looking forward” to a similar extravaganza might bring a curl to the lip.

It was a troubled project, with mutterings of thousands of euro squandered on parties and foreign trips, a late replacement of curators, and a generally downbeat response even to its successes. People did visit, and there was some good art. But it is unlikely to emerge again.

That’s one of our troubles: the fact that something was done badly frequently means we don’t attempt to fix the problems and try again. But a visit to the Edinburgh Art Festival demonstrates how, with the right structure and a bit of co-operation, such an event can fill a big gap in opportunities for our artists.

It may seem like a rich person’s problem, a perspective that besets most cultural arguments in times of recession. But the collapse of the economy dealt an enormous blow to the carefully nurtured careers of a great many Irish artists.

Investment by Culture Ireland in galleries attending international art fairs was developing an international perspective on the rich cultural landscape here. This is a slow and fragile process, as international curators and collectors don’t like to feel they’re being “sold” an idea.

The most consistent long-term attendee on a circuit that includes Armory New York, ArtBasel and Frieze London has been Dublin’s Kerlin Gallery. While others do go to the main and satellite fairs, it is extraordinary how frequently the names of Kerlin artists crop up in the conversations of international buyers and opinion formers.

Kerlin’s roster of artists, which includes Sean Scully, Dorothy Cross, Elizabeth Magill and Isabel Nolan, is undoubtedly strong, but this is an idea that does a huge disservice to the diversity and energy in the Irish art world. It also excludes any artist without representation – which, above a certain level of quality, also involves a huge amount of luck – while it ignores the energy and scale of the network of artist-run and project spaces here. Success creates reputation, but shouldn’t work to exclude it.

It seems obvious that, alongside supporting galleries in presenting overseas, creating a focus point for the international art world to come to our capital city is a less expensive and possibly more productive option.

At the Edinburgh Art Festival, now headed up by Irishwoman Sorcha Carey, the Momentum Programme (a partnership between Festivals Edinburgh, British Council Scotland and Creative Scotland) brought curators and directors from Brazil, Mexico, India, France, Germany, Argentina and Canada, as well as a posse of international journalists.

The Edinburgh model doesn’t involve lavish launches at home or abroad, or expensive standalone exhibitions. Instead, the city’s arts institutions, galleries, studios and project spaces put their best foot forward during August, including holding their openings in the same week.

A programme of commissions, projects and pop-ups enriches the tapestry of the festival, and it can be scaled according to available resources. Invited visitors get a concentrated series of private views, studio visits and really good art, and leave with a sense of a thriving scene – plus a long list of contacts.

This year the Irish artist Emma Finn, currently based in Edinburgh, had a brilliant pop-up exhibition, Double Mountain, and an audience she wouldn’t have gained outside the festival.

What’s stopping Dublin? Co-operation, for one thing. The scene between our arts institutions has been described to me by one curator as “medieval, full of fiefdoms, where we need to be more collegiate”.

A positive development is September’s Dublin Gallery Weekend, an initiative of the Dublin Gallery Map set up by Rayne Booth working at the Temple Bar Gallery. Thirty galleries will hold events over one weekend.

“It’s very much the beginning,” says Booth. “Hopefully it will grow, and next year we’ll be talking to Culture Ireland about bringing people in; people can start to programme towards that.”

Creating a festival of visual art in Dublin by getting the existing players to work together is such a no-brainer, it’s strange it hasn’t happened already. There is no need for fact-finding trips, New York launches or huge vanity projects because, best of all, the only people getting on planes would be the ones coming in.