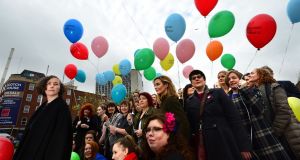 Supporters of the Waking The Feminists campaign on the Rosie Hackett bridge in Dublin on Monday. Photograph: Dara Mac Dónaill

At this week’s Waking The Feminists event – held to mark the year-long gender equality campaign – speakers were invited to offer “one more thing” to the debate. Here are 10 things raised at the final public event on Monday:

1 Acting is a different profession for women

“We become the stories we hear and tell ourselves,” said Aisling O’Sullivan Where are the “stories from and about myself?”, she wondered.

Lisa Dwan said she was “liberated from the bitch, the bimbo, the psychos” of mainstream roles when she performed Samuel Beckett’s work for the first time; the “joy of having my body removed”.

Actor Tom Vaughan-Lawlor said his wife’s experiences opened his eyes about “the visible imbalance in terms of age and availability of roles, the focus on aging, and weight lost or gained, the myriad of subtle ways in which women on film sets and rehearsal rooms are made to feel less than”.

2 Polish women have it worse

Theatre producer and translator Joanna Crawley shared her experience of feminism in the “madly political, male-dominated and absolutely hardcore” world of Polish theatre.

When theatre-makers started to “defend the female voice”, their good intentions went awry.

Instead of liberation, audiences had to suffer “a never-ending reenactment of rapes, murders and beatings. Actresses in Poland became experts in being spectacularly dramatically hurt”.

Crawley made a plea for artists in Ireland to avoid making a similar mistake: “There is a fine line between making something visible and perpetuating it. A broken woman on stage is a powerful image but it becomes dangerous when it turns into a trend, a special effect.”

3 The statistics speak for themselves

Drs Brenda Donohue, Tanya Dean and Ciara O’Dowd have conducted research for Waking The Feminists, andoffered a gender breakdown for the categories of designers, cast members, authors, and directors in a sample of the top 10 funded theatre companies over the last 10 years. Their findings showed a bleak disparity between funding levels and gender equality.

As Dr Donohue said: “The top three funded organisations [the Abbey, Gate and Dublin Theatre Festival] had lower percentages for female participation in all categories” of theatre-making.

The independent sector presents a far more equitable space, but it is more difficult to find information about it.

“If you are female, if you write, direct, work backstage or do anything theatre-related for the next 10 years: record your contribution so you can be counted next time,” Dr Donohue said.

4 Even those behind the scenes have something to say

Lian Bell, whose comments on social media ignited the movement last year, spoke of her initial reluctance to participate in the public debate.

She wanted a “nice, quiet behind-the-scenes life”. But, she then wondered, “if not me, who?”, realising that “we lose too much if we stay silent”.

Lighting designer Sinéad McKenna said she did not work with a single female chief electrician, sound designer, composer or production manager in 2016.

Production manager Marie Tierney wondered whether language itself plays a role in “reinforcing preconceptions and validating discrimination” in the technical roles in theatre. “No wonder there are no sound designers when they are known as noise boys,” she said.

5 Equality should be institutionalised

The top-funded theatre institutions in Ireland “can and should be instrumental in creating change”, said director of the Project Arts Centre Cian O’Brien.

Collette Farrell, of the Dublin Theatre Festival, reinforces O’Brien’s statement: “It is not enough to believe in gender equality at board and staff-level. It needs to be institutionalised.”

Jim Culleton, artistic director of Fishamble said, since making gender equality a priority, his organisation has established a sub-committee for gender balance and now uses a gender-blind approach to reading script submissions.

Eve Ensler, who wrote The Vagina Monologues, says policy does not not always mean change. Patriarchy is “a stubborn and insidious virus. Without constant vigilance, it is easy to slip back”.

6 We cannot rewrite history but we can shape the future

Historian Catriona Crowe said Waking The Feminists put “society in the dock as much as theatre”, and that the campaign “united two different historical approaches: the noisy and the restrained. You will take your place in the illustrious history of Irish feminism”.

But, what about the illustrious history of Irish art?

When confronted about the gender bias, the National Concert Hall responded that it could not “rewrite history”. Deasy argued that such institutions set the standard for contemporary arts practice. Replicating the gender bias of the past perpetuates inequality in the future.

7 Waking The Feminists is not just about the arts

8 Motherhood is the great unresolved issue of feminism

Director Tara Derrington spoke on behalf of Mothers Artists Makers (Mams) – a network of Irish female feminist theatre-makers and parents – and highlighted the disproportionate impact of parenting on the salaries of mothers who work in theatre.

Their research revealed that, among those surveyed, over half lost all income from theatre after becoming parents, while 95 per cent of the remaining figure suffered reduced incomes. They found this made “working in theatre unsustainable for mams. The major cause of gender imbalance in theatre is the exodus of women when they have children . . . due to the unequal care burden on women.”

Comedian Alison Spittle raised the power of compliments in the male-dominated world of stand-up performance.

“I’d get these ones like ‘I don’t like female comedians, but you’re funny’,” she said. “Comedians live for compliments, but then I realised that compliments are just like custard and misogyny is a bit like shite.”

10 Children: feminists of the future

Eight-year-old actress Amelie Metcalfe has just finished touring A Feast of Bones with Theatre Lovett, in which the majority of creative roles were performed by women.

“That’s how I know women can make great theatre,” she said. “I am, as you see, not just female, but a child and I’d like to ask you when is Irish theatre going to wake up to children. Young people, like me, need good theatre just as much as adults do.”