The Match Box review: A bereaved woman plays with fire 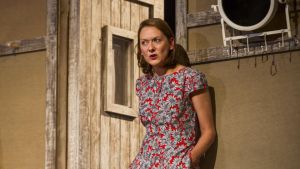 Alone in a house on Valentia Island, in a quiet sanctuary pierced only by skirling seabirds, a nervy woman plays with matches. “There is, I find, something pleasant about the smell of sulphur,” says Sal, letting them spark and sail to the floor, savouring each acrid whiff.

Even in the earliest moments of Frank McGuinness’s monologue from 2012, now receiving its Irish premiere in a production by Galway International Arts Festival, it is unclear whether our protagonist is living in self-exile or banishment. Who is likely to get burned?

In a commanding solo performance, Cathy Belton plays a Liverpudlian mother pushed to the edge of the world, and perhaps her sanity, by a tragedy. Describing her life in England as the daughter of Irish emigrants who becomes a young single mother, she sees herself, at one point, standing in a long line of humanity, where every preceding death and ensuing life stretch out on either side of her. But when her daughter is killed in a crossfire of gang violence, the future is horribly denied, the continuum broken. Sal seems neither adult nor child, living in a stasis between condemnation, forgiveness and revenge.

The strength of Belton’s skilfully measured performance, and of director Joan Sheehy’s alert and coiled production, is to mingle a horrific reality with something more otherworldly. Belton will leave her gaze hollow and maniacally focused, like someone who hasn’t slept for days, but may also affect a spritely physicality, sitting spryly on a bookshelf or a chair back. It’s deliberate and discomfiting, as though summoning the spirit of the lost child (whose voice, among others, Sal sometimes hears). That recognises how McGuinness constructs a mind tormented by denial, grief and retribution. Sal even sees her child’s killers as vulnerable children themselves.

Correspondingly, Paul Keogan’s cavernous set, warmly lit, makes its walls ghostly and translucent, like an imagined prison, where Sal could be rattling around the cage of her own skull. Sal’s is certainly a distracted monologue, full of circuitous detail and anecdotal detours, but Belton wisely doesn’t play distrait; if anything her performance is more compelling for how she largely withholds emotion, burying it deep within lest it become all-consuming, and choosing instead a complicated path of action.

The play has some real-life inspiration, but, inviting mythic associations through discreet classical references and ornamental curls of speech, McGuinness pushes Sal towards something more archetypal. The text is, finally, overladen with allusions to Greek avengers, covens of conspirators and a history of Irish resistance – as though Electra had relatives in the Provos – but Belton and Sheehy hold true to a more unsettling psychology of “savagery”, something as incendiary in life as it is in fiction. That sulphuric instinct for retribution may begin as a spark, the play knows, but left unchecked it can rage to inflame the world. Until July 26th

Maggie O’Farrell : ‘I wanted to give this boy, overlooked by history, a voice’
8

Martin Freeman: ‘I’m not nice, not your best mate. I’m angry and a bit superior’
9

Nuns, non-virgins and a serial killer: Sharing stories through nature in west Cork
10 Welcome to Dublin, unless you're black
Real news has value SUBSCRIBE