Stage Struck: Frankly, my dear, you gotta make ’em give a damn

There’s a fine line between compassion and comedy in theatre. Is there a formula for empathy? 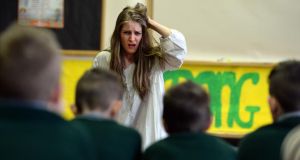 Picture this. A man spends a long bus journey groaning over a very full bladder. The bus finally pulls into a station for a brief stop and the guy rushes out, leaving his bag on board. But there’s a problem: all the toilets are closed. He runs around, one muscle-twitch away from humiliation, looking for someone to open them. Then, out of the corner of his eye, he sees the bus pulling away, with his possessions. It’s a dilemma worthy (well, almost) of Hamlet: to pee or not to pee?

This is a scenario devised by two characters in a recent version of Uncle Vanya, by the Polish writer Pawel Demirski, who worry that nobody can empathise with the ineffectual sad sack at the centre of the play. If this bus vs bladder vignette of relatable misery could be his introduction, they think, then maybe the audience will give a damn about what happens next.

“That’s the rule,” says Sonya: “Get to like the protagonist, so that later we can care about his fate on stage and not be bored – much.”

They may be fretting too much. Vanya has been unlucky in love for more than a century, yet people still invest in the consequence: There but for the grace of Chekhov go us. But characters won’t command empathy by simply being pathetic. “One must have a heart of stone to read the death of little Nell without laughing,” said Oscar Wilde, and there’s always been a fine line – or sometimes a banana skin – between pathos and bathos.

These thoughts came galloping to mind while watching War Horse, whose animal cast of impressive puppets seem to live and breathe, arousing compassion, while their much thinner human counterparts are gunned down with barely a blink of sympathy. It’s not just the artistry that makes Joey believable, but the puppet’s vulnerability, while our imagination fills in the blanks. How can flesh-and-blood actors ever hope to compete?

That doesn’t quite explain how villains work, from Richard III to House of Card’s Frank Underwood to the child psychotic in Genevieve Hulme-Beaman’s Pondling, now on in Smock Alley. Society depends on repudiating these murderous anti-heroes; instead, they earn our sneaky admiration. Is it because they live out our dark desires or because they address us directly, like conspirators in their schemes?

Even Mollser, whose main purpose in Sean O’Casey’s The Plough and the Stars is to die tragically, required an imaginative makeover to endear her to school audiences in the Abbey’s recent Me, Mollser. Writer Ali White wisely gave the character a history, a sexuality and, critically, a moment out of the house – in short, a personality. Making her relatable helped to bring home the injustice of her short life.

It’s a tricky business: one of the reasons we go to the theatre is to identify with others, and one reason a play can fail is if we don’t. If there was a formula for automatic empathy, you might expect to see a deluge of plays where animal puppets deliver soliloquies about embarrassing bodily functions.

It doesn’t sound promising but, hey, at least it’s a pain you can feel.

What we need now: A primer in an all-consuming and fast-moving crisis
6

‘After Blackadder, for the first time in my life it was dead easy to get in the door’
Real news has value SUBSCRIBE