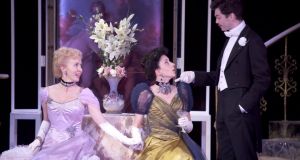 
Appearances are deceptive in Oscar Wilde’s 1895 melodrama, where an upright politician’s career is built on a sordid secret, an arch manipulator may be “a genius in the daytime and a beauty at night” and a trivial dandy is begrudgingly forced to behave responsibly. It follows that director Ethan McSweeny’s new production for the Gate should open with an ironic blast of Rule Brittania! before recognising a more fragile world of surfaces.

That seizes on the governing solipsism in Wilde’s political play, expressed in epigrams. “Morality is simply the attitude we adopt towards people whom we personally dislike,” says Aoibheann O’Hara’s sly and haughty Mrs Cheveley, who blackmails Sir Robert Chiltern (Garrett Lombard) to back a crooked scheme of hers in Argentina. “The only possible society is oneself,” says Lord Goring (Marty Rea), the dandy entombed in his self-image. But in his attempts to reconcile the inflexible Mrs Chiltern (Lorna Quinn) with her unrepentant husband, he ultimately defends that status quo, warts and all.

The production pays much attention to the play’s politics, but seems less confident with its comedy. A rococo painting of Venus and Vulcan makes teasing parallels with the play’s gender conflicts, while O’Connor’s set comes to feel as imprisoning as a panopticon, or later, a gilded cage. Its witticisms, like a relay of minor characters, seem more staggered, although Marion O’Dwyer is nicely trilling and loquacious as Lady Markby and David Yelland is a winningly gruff Lord Caversham.

The production only comes alive, however, when Rea is on stage. His Lord Goring is allowed a nimble physicality where others are mired in Victorian stiffness. When Rea is joined by Simon Coury’s deadpan butler Phipps, the production at last settles on a comfortable register – but that takes two acts.

When Wilde’s mechanical plotting begins to creak under incriminating letters, fortuitous discoveries and unmasking contrivances, McSweeny and Rea decide to match that artificiality with slapstick. It works surprisingly well, as befits “a thoroughly modern intellect”, while exposing the stuffy disputations of the play. In matters of morality and marriage, the play tells us, we must make allowances. Squaring up to the demands of Wilde, the production might have decided to take greater liberties earlier.
Until June 14