A View from the Bridge review: A moderate rendering of Miller

A dutiful, illustrative staging of Arthur Miller’s 1956 drama rather than a freshly invigorating one 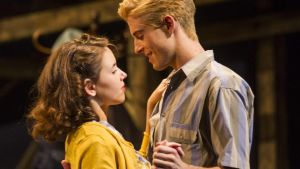 A View From the Bridge

“I mean there must be some kinda law . . . ” stammers Eddie Carbone in his mystified search for personal justice. In Arthur Miller’s 1956 drama, a tangle of honour and desire structured as a Greek tragedy, the law is a shifting concept: an inviolable natural order, a social imposition ignored when necessary, an authority that is never on your side.

When Eddie, an Italian-American longshoreman, hides his wife’s Italian immigrant cousins, his code is that of old-country silence. Yet he is as blind as Oedipus to his ruinous desires for his 17-year-old niece. Judgment waits in the helpless conscience of his lawyer, the watchful eyes of his community and, most severely, in the torment of his own betrayed principles.

Director Joe Dowling’s serviceable new production follows the lead of Miller’s narrating lawyer, Alfieri (Bosco Hogan), a fretful chorus, who traces “3,000 years of distrust” from Brooklyn to Greece. Beowulf Borritt’s set likewise bends the image of blue-collar society into a more classic architecture, where rickety docks against a brooding Brooklyn Bridge close in like an amphitheatre, with echoes of the gallows. Tragedy always makes for a brutal court.

Ten years since the Gate last staged the play, that makes for a dutiful, illustrative staging rather than a freshly invigorating one. That’s partly because Miller’s writing – which tips from earthy suggestion to high-handed explanation – tends to strong-arm naturalistic interpretations (while also making it ripe for stripped and revelatory readings, such as Ivo Van Hove’s). Dowling is inclined to stay out of the play’s way, ensuring a brisk pace, indulging every crowd scene and, under the blanket glow of Malcolm Rippeth’s lights, providing a bright emulation of 1950s America that comes off as too varnished.

Sleeves rolled tight, thumbs hooked in his belt, Scott Aiello’s Eddie gives a similar study in masculinity, effortlessly in command of the voice of the period, but striking a tone more of breezy exasperation than eruptive desire. “You’re the madonna type,” he tells his niece Catherine (Lauren Coe), oblivious to the implications of his worship. Such supposed innocence needs to be punctured, and it falls to a beautifully considered performance from Niamh McCann as his rejected wife, Beatrice, to bring the prick of sexual frankness, refreshingly sceptical towards her niece’s coyness, a clue that Catherine could be more than a study in naivety.

Joey Phillips and Peter Coonan’s charmingly balanced performances as Italian brothers Rodolpho and Marco announce a more poignant sense of fatalism and invite a new focus. Phillips’s romantic youth affronts (perhaps even seduces) Eddie with his uninhibited expression, his belief in American promise, while Coonan’s shoulders bear the burden of honour and duty with a stoic dignity Eddie can’t reach. Tellingly, in one delicately realised scene, it is Marco’s word – and its inevitable breach – that pierces the heart more sharply that Eddie’s self-destruction and the ruin of a name. It’s not all down to the performance, though. At these times of urgent refuge in Europe, and the horrific implications of its betrayal, it is our view that has shifted.

Ireland’s Empire: The long reach of the Hiberno-Catholic faith
5