The Walls Have Ears review: A terrific evening of music | Tiger Dublin Fringe 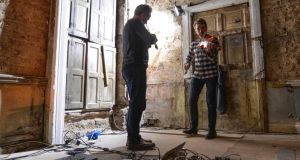 The Walls Have Ears

The Walls Have Ears

As Shane Latimer’s delayed and looped guitars fade down, Seán Mac Erlaine’s rough honks and horns draw the crowd up the ancient stairs of one of Dublin’s most atmospheric venues. In a first-floor room, Justin Carroll is creating scattered bits of musical logic processed into bits and bleeps, a weird and lovely contrast to the smell of the room, which feels like it’s gently falling apart around you. Mac Earlaine takes over with ghostly notes and vocals before Sean Carpio drags people out and up again, making something more rhythmic and substantial from his guitar and processed sounds, singing over tape-recorded vocals that are given a cathedral-like resonance by effects and sound-mixing devilment. Then it’s down to the ground floor for the most virtuosic performance of the evening, by Dutch cellist Ernst Reijseger. It runs the gamut from sombre and sonorous to furious and frenetic, playfully stretching the instrument through genres and styles, scratching it, styling it, and touring it around the rooms. Reijseger brings a wild and humorous edge that’s so often missing in improvised music, and adds lacquer and lustre to a terrific evening of music.