The dark heart of Dancing at Lughnasa

Brian Friel’s 1990 play about five sisters in 1930s Donegal is finally being directed by a woman, Annabelle Comyn, and she intends to expose its hidden darkness 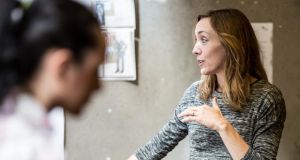 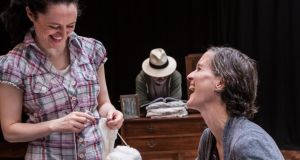 It seems remarkable that an Irish play celebrated for its insight into female experience should never have been directed, in Ireland, by a woman. Now that omission has been corrected, and in some style.

The 25th anniversary of the Dublin premiere of Brian Friel’s Dancing at Lughnasa is being celebrated with a new production. Presented by the Lyric Theatre in Belfast, in association with the Lughnasa International Friel Festival – Ireland’s first annual cross-Border arts festival – the play is, at last, falling into female hands, in the shape of renowned theatre director Annabelle Comyn.

Nobody could dispute that women are at the very heart of this much-loved play, set in Co Donegal in 1936 during the Celtic harvest festival of Lughnasa. It tells the story of the five Mundy sisters and their brother, Father Jack, who has returned home after 25 years away on missionary duties. Famously, Friel dedicated it to his own aunts, “those five brave Glenties women”.

But does it need a woman to understand it and interpret it? “We picked Annabelle because she is a brilliant director. It was nothing to do with gender,” says Jimmy Fay, the Lyric’s executive director. “I am a great admirer of her work. She’s innovative, detailed, forensic. Previous productions of Lughnasa have sometimes been rather lyrical or flowery. Because it’s a memory play [told by the sisters’ nephew Michael, who recalls the summer he spent with his aunts when he was seven], there is a tendency to get dewy-eyed, to wrap it in sepia. I think Annabelle brings a different note. I wouldn’t say she’s reinterpreting it. I’d say she’s bringing the play alive again.”

Given the brief but vital centrality of dance to the play, Fay also welcomes the presence of Liz Roche on the creative team. “Roche is amazing. She was the first Irish choreographer to be commissioned to create a contemporary dance work, Bastard Amber, for the Abbey.”

When Friel wrote the play in 1990, the vivid evocation of the five sisters – Kate, Maggie, Christina, Rose and Agnes – was a revelation. Forget the symbolic trappings of Mother Ireland, or Cathleen Ní Houlihan, these were five individuals struggling for self-realisation within a bleakly restrictive patriarchal system. More remarkably still, it was written by a man.

“Obviously Friel was very influenced by his female relatives,” says Patricia McBride, director of An Grianán theatre in Letterkenny, Co Donegal, which has a long association with Friel and is the other host theatre for the new production. “Of course, there were his aunts when he was growing up, but he’s also married, he’s a family man. He draws on all that experience. You’ll notice that none of these women are victims. They are all strong. They’re a formidable bunch, whether it’s Maggie, the homemaker; or Kate, who’s holding it all together with her small salary. Nobody is helping them out.”

Fay notes that when Lughnasa was first performed 25 years ago in Dublin, Mary Robinson, Ireland’s first female president, had just been elected. “Now we’ve just had the Marriage Equality Bill. So it’s a good time to revisit the play. It feels like we’re once more going in the right direction.”

Like Fay, McBride says the tendency to approach the play with too soft a touch is a mistake. “These women were living a life of subsistence, trying to break out of the confines of parochial society. Too often, [Lughnasa] is portrayed as nostalgic or sentimental. While it’s true that there is tenderness there, there is a dark heart too.”

That’s why McBride was happy to hear that Comyn was taking charge. “She has the ability to get to the heart of this production; she will expose that hidden darkness.”

And what of Comyn herself? “For me, what I find incredibly important is that this play looks at people’s character or history or the moral codes by which they lived their lives,” she says. “It’s also about how we try to claim ownership of other people’s characters through language. The journey of the play traces how language is used as a form of colonisation.

“Look at the character of Michael, the narrator, how he articulates who these people were, and he only has language as his tool. But you can’t frame them like that, you can’t confine them. People are more than the facts of their lives.”

So is the famous moment of rapture, when the sisters spontaneously burst into dance, a rejection of language and all its restrictions? After all, Friel said he saw the dance as “complete self-expression, dance as dream-memory, dance as substitute for language”. And Fay also notes that Friel instructed that the women should dance against the beat.

“Yes, it’s a way of having your voice heard beyond language,” says Comyn. “They are on a journey towards finding a voice for themselves, finding ownership and agency over their own lives.”

For McBride, the dance “shows the wild hearts of these women . . . There’s this moment of complete abandon, everybody goes crazy, their inner beings come out, all their hopes and desires, and then Maggie goes back to peeling the spuds.”

According to Comyn, the tragedy of the play is that the women are trying to maintain a family, a way of life, and yet this ends up becoming the very thing that they are reacting against.

McBride says the reason that Dancing at Lughnasa retains its power, and its ability to connect with audiences, is because it transcends the particular and resonates with something greater in us.

“Friel has a universal touch,” she says. “He writes locally, but with an international perspective. It goes far beyond rural Donegal. Frustrated ambitions, lost loves – most families know about these things.”

DANCING AT LUGHNASA: THE REAL-LIFE INSPIRATION

We know that Dancing at Lughnasa is semi-autobiographical, because Brian Friel has confirmed it.

“I was at a play at the National Theatre with the playwright Thomas Kilroy,” he said. “We walked across the Waterloo Bridge and up the strand. It was about 11.30 at night and there were homeless people sleeping in the doorways. Tom said, ‘If you talked to those people, I’m sure many of them are Irish.’ And I said, ‘I had two aunts who, I think, ended up something like that.’ He said, ‘Why don’t you write about that?’ So that’s how it began: backward.”

According to Kilroy, Friel “told the story of himself as a young man setting off for London in search of the two aunts who had left Donegal years before. What he found was destitution.”

Friel’s mother and her four sisters, the McLoones, who lived in Glenties, Co Donegal, are the inspiration for the Mundy sisters in the play. (Apparently Mundy is a common local derivation of the family name McLoone.) Father Jack, the priest who returns home a broken man, is based on their brother Bernard, known as Fr Barney. Indeed, a note from Friel’s diary, contained in the collected Friel papers, which are held in the National Library, says that “I suppose the play is about the McLoone family, Fr Barney – and my father. Family life – make-believe – remembering and remaking the past – betrayal – groping towards love. Really original stuff for me!”