The Butcher Boy is back – a murderer still among us

Like a ‘ride through a dark carnival’, Francie Brady returns in Pat McCabe’s new play 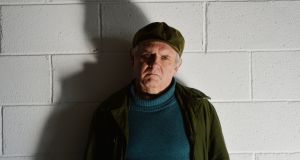 Pat McCabe: “When I wrote ‘The Butcher Boy’, nothing had happened in Clones for 100 years. The story was 100 years old, and people still spoke in low tones about it. Now entire families get wiped out, and it’s gone.” Photograph: Alan Betson

Murderers are everywhere these days. They lurk at the edges of our TV screens; they star in documentaries and on the news; they loom large in the pages of crime novels and, increasingly, literary fiction. Once locked up, however, they tend to vanish from our radar. We’re not, it seems, unduly keen to know what happens to killers when they get old.

One of the most celebrated murderers in Irish fiction is Francie Brady, the narrator of Pat McCabe’s 1992 novel The Butcher Boy. The book won The Irish Times/Aer Lingus literature prize, was shortlisted for the Booker and, arguably, set the stylistic template for subsequent generations of Irish novelists and playwrights, from Martin McDonagh through Enda Walsh to Donal Ryan.

The novel ends with Francie’s incarceration in Dundrum Mental Hospital. A new play, The Leaves of Heaven, now tells the next and last chapter of his story. Why, almost a quarter of a century later, did McCabe decide to revisit his iconic character?

“It didn’t really work like that,” he says. “I don’t consciously go back to anything. I’ve been writing for so long now, I keep writing and writing – and sometimes things just happen and you don’t quite know why.

“Although somebody had said something to me about three years ago, and it must have lodged in my head. They said, ‘Did you ever think about writing a sequel to Francie’s story?’ And I said, ‘Ah, nobody’d be interested in that. Why would anybody be interested in what happened to him?’ ”

When The Butcher Boy was first published, McCabe thought only a couple of hundred people at most would ever read it. He was amazed when it was a hit both in Ireland and further afield, appearing on stage as Frank Pig Says Hello and on screen as an internationally successful feature film, adapted and directed by Neil Jordan.

“I didn’t set out to write a successful novel,” McCabe says. “It was not uppermost in my mind to write about a damaged boy. If anything, it was about a soul trying to make sense of the world. And what’s that this is. And that’s what it always has been. The character being a boy, obviously there was an element of autobiography. But, ultimately, it was a sensibility apprehending a confused world.”

The fact that McCabe (61) is now a grandfather played a part in the genesis of the new play.

“As you get older, you think the world is a different place. But some things don’t change. My grandchild has my father’s eyes. He’ll put on my hat and he’ll have a walking-stick that I use, and my wife and I get the same kick out of that my great-great-great-great grandfather would have got out of it.

“These things – they’re not huge life changes, but they are significant. They lock you into the stream of human history, in a way.”

In The Leaves of Heaven, 62-year-old Francie has an incurable illness. “The play doesn’t dwell on that,” McCabe says. “All you need to know is that perhaps he has had some kind of redemption, through Catholicism or some version of it. There’s a lot of supplication, a lot of sacred music, a lot of confusion.”

Francie (played by Brian Mallon) shares the stage with a female character (Kate O’Toole), ostensibly a cleaner at the hospital who also – in the script, and maybe therefore in Francie’s head – morphs into a number of other women.

“The dialogue covers a lot of the things that might have happened since he went into the hospital, which would have been 1963,” McCabe says. “So you have cultural references through the 1970s and 1980s.”

There’s also a generous helping of Schubert, whose song-cycle Die Winterreise acted as a kind of sonic backdrop while McCabe was writing the piece. “That was a huge influence: death in winter. Or in autumn.”

The Butcher Boy was loosely based on the story of a murder that took place in McCabe’s home town of Clones, Co Monaghan, in 1904. These days the number of real-life family tragedies in Ireland – murders, suicides and combinations of the two – has escalated considerably. Does he feel a responsibility to be cautious in writing about such subjects in such a very different climate?

“When I wrote The Butcher Boy, nothing had happened in that town for 100 years,” he says. “The story was 100 years old, and people still spoke in low tones about it. Now entire families get wiped out, and it’s gone.

“There is a debasement of the spiritual currency, there’s no doubt about that. But I don’t know if there’s much I can do about that at this stage – that’s for another generation to figure out. Insofar as anybody can figure it out.”

McCabe insists he is always cautious when it comes to matters of morality. “If I felt that anything that was coming from my pen was there for shock value alone, or for some spurious notion of getting attention, I would be cautious then. If I can defend it morally, I leave it in. If I can’t, I won’t. So by the time it’s got there, I’ve thought long and hard about it.”

When The Butcher Boy was first published, Ireland was a country where moving statues and apparitions of the blessed Virgin Mary were common. Nowadays Catholicism is seen very differently – and is rarely, at least in the mainstream media, associated with redemption.

“Which is unfortunate,” says McCabe. “For all its failings, Catholicism is something I can understand because all my people were of that persuasion. Some of them took comfort from it, some of them didn’t, which is also part of the complexity and perplexity of life.

“I used to be taught piano by a nun – for nothing. She took no money. All those big convents are now empty. They’re incredible buildings to walk through. So all that energy that’s expended on how awful these places were . . . well, that’s just empty energy blowing through those broken windows. It might be better just to think about Schubert being taught to young boys for no money.”

The mental hospital in the play is another big, empty building that echoes with voices from the past. So it is oddly appropriate that The Leaves of Heaven is being staged at The Complex at Little Green Street, just off Dublin’s Capel Street.

Run by creative artists and dedicated to innovative, accessible work in theatre, visual arts and film, the venue’s upstairs performance space is bright and surprisingly spacious but wears its industrial heritage on its sleeve: its interior is instantly recognisable as a former warehouse.

As it happens, the choice of The Complex was down to the play’s director, Joe O’Byrne, who is artist in residence there. O’Bryne also directed the original production of Frank Pig Says Hello.

“Joe and I are long-standing collaborators and good friends,” says McCabe. “He has a great theatrical sensibility, and he always brings something of himself to his productions. When he read the script first, he gave me a few notes. One of his notes was, he sees it like a ghost train ride through a dark carnival.”

A sombre sort of show, then?

“Well it would be, wouldn’t it?” McCabe’s retort is sharp but his eyes are twinkling. “At this stage, anything I write, people have a fair idea whether they want to come to it or they want to run a mile from it. It’s a small-scale thing. I just hope people will enjoy it.”

The Leaves of Heaven by Pat McCabe opens at The Complex, Dublin on Thursday and runs until October 22nd. http://thecomplex.ie