The Ark: Theatrical treats, and where to find them 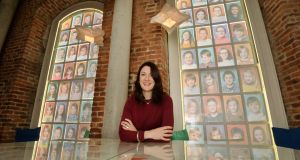 “The provision of art, music and literature for young audiences has grown enormously.” Aideen Howard, director of the Ark. Photograph: Alan Betson 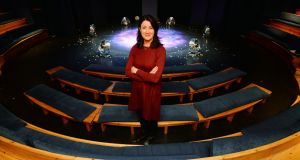 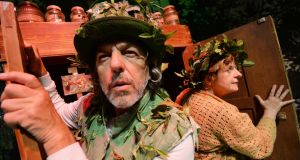 Peter Rinderknecht and Sabine Zeininger in Johannes and Margarethe, one of a series of productions in the Ark’s Theatre for Children series as part of this year’s Dublin Theatre Festival. Photograph: Alan Betson 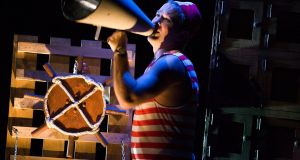 Louis Lovett in The Girl who Forgot to Sing Badly which was produced at the Ark in 2010. Photograph: Pat Redmond 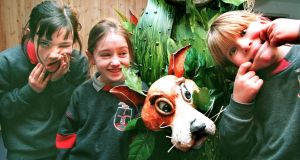 Children beside the Animal Tree, in the Word Garden, an 18-day festival of language, literature and the verbal arts held at the Ark. Photograph: Eric Luke 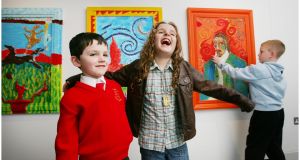 Paul Ryder and Megan Kenny at the opening in the Ark in 2006 of The Butterfly Effect, an exhibition of work by children from Fatima Mansions. Photograph: Bryan O’Brien

It is Friday morning in Temple Bar and the street sweepers are busy washing the cobblestones. Outside the Ark, the faces of 264 girls and boys gaze down, some smiling, some serious; stained-glass saints in this cultural cathedral built specifically for young people.

The photographs of children are part of the Ark’s 21st anniversary celebrations, re-creating a commission from when it opened in 1995. As Aideen Howard, director of the Ark, says: “It makes a statement to the world: that Temple Bar, an area that isn’t usually associated with children, are part of the culture here too.”

Howard came to the Ark 18 months ago after 10 years at the Abbey Theatre, where she was literary director. The first big adjustment she had to make was to the timetable. “After a few decades working at theatre for grown-ups, where the day culminates with an evening performance, acclimatising to the structure of a child’s day took some getting used to. Here, we peak about 10.15am. It sounds glib when you say it, but it is actually very important. It brings you very quickly into the world and structure of the life of the child. It changes the way in which work is made.”

Whether it is a performance of a play for children, or a process-led art workshop, “You are looking at the work, literally, in the clear light of day. There is no ritual presentation around it, like you have with art for other audiences. It has to stand on own merits at 10 o’clock in the morning.”

Climbing up the spiral staircase to Howard’s office, the walls are framed by art work made by, for, and with children. There are sculptural objects, posters for plays, mixed-media paintings, and artefacts representing the various art-forms that the Ark has presented for children in the years since it began . Howard remembers visiting the building in its first months, accompanying her teacher-father, who was bringing a busload of primary students to a children’s opera. “I remember the palpable excitement of the children as they stepped over the threshold. It was incredible. Electric. And it is something that I do not tire of seeing. It’s that hoary old cliche: that sense of the children coming into the Ark and being transported into different place.”

In 1989 the UN General Assembly adopted the Convention on the Rights of the Child. One of the fundamental rights it ascribed to children was the right to arts, culture and play, which are outlined as key aspects in personal development. Ireland signed up to the convention in 1992, and, as Howard says, “The Ark was set up in the first flush of enthusiasm. By setting up the Ark, the State was essentially underwriting children’s right to art and culture and recreation. That is a big statement, conceptually and philosophically, and that commitment is a brilliant, enabling starting point.”

However, Howard believes there is a general disconnect in Irish culture when it comes to our relationship with children in general. “It is much less sophisticated and hospitable than other places, and that is not just confined to art. In Italy, for example, if you were to go out to eat at 8 o’clock at night you would be welcomed into a restaurant. In Ireland, issues pertaining to children are seen as less serious, and that affects everything: whether you are talking about health, education or children’s decision-making. But, yes, it also applies to the way in which art for, by and about children is perceived.

“There is a very different sense of status, both in the art world and in the culture at large. In my conversations in and around art for children, for example, it never feels like talking about the art is enough. I always feel like we are making an argument for advocacy at same time.”

One way that the Ark has tackled the issue of status is to ask artists who have been making work with other audiences to make work for children. In the last few years, it has commissioned work for young audiences by writer Amy Conroy and WillFredd Theatre Company, for example, and on the day we meet, jazz singer Lauren Kinsella, who was voted UK Vocalist of the Year by Jazz FM earlier this year, is performing at a Monster Music Improv event for audiences of all ages. Having the “energy of new directors, playwrights, and actors allows us to improve our work, as well broaden the way in which the work is seen”, Howard says.

“In 1995, there were only a handful of artists who were dedicated to making work exclusively for children, but the provision of art, music and literature for young audiences has grown enormously in the interim and there are many artists now who have developed a body of work and practice around children. These days the Ark exists in a thriving context. It is very much part of a culture, an ecosystem, of much more connected thinking about how we make work for children. As a result, the Ark’s capacity to invest in and develop artists’ performed practice for children has become really sophisticated.”

The challenge for the next 21 years, Howard says, “will be how we consider children’s involvement in the process of making work a bit earlier than we do now. How do we change the ratio of making work for children, so that work is being made by and with children too.”

The Ark has made a vital step towards fostering that process at the most fundamental level. Earlier this year it engaged 12 local children, “who live within walking distance of The Ark but who might not otherwise be able to access it”, to form a Children’s Council. Since March, the children have been working with theatre artist Shaun Dunne: watching performances, participating in workshops, contributing to the Ark’s governing charter. The fact that the children would have access to high quality art was fundamental to the council’s remit, but it also gives Howard and her colleagues “a clear mechanism by which we can change our practices and the way we make work so that everything we are doing has an emphasis on children. We need to enable children to be decision-makers as well as audience members.”

A LOOK AT THE LANDSCAPE OF CHILDHOOD

As part of its 21st anniversary celebrations, the Ark has organised a day-long conference to reflect on how the landscape of childhood in Ireland has changed in the past two decades and look at what should change for the better in the next 21 years. As Howard says: “The changes that have occurred for children have been momentous. From a social, educational and legal perspective. There has been a huge leap in understanding about what happens during development in early years. There is now a cabinet minister with responsibility for children.”

The forum is designed to allow those who work with the children in a variety of areas, “who might not otherwise be having a conversation to connect with each other, and we would like that artists should overhear these conversations too, because I think it will give a real insight into what children’s lives are like today.”

Speakers include representatives from the Higher Education Authority, Children’s Rights Alliance, the ISPCC, and the Arts Council, as well as Laureate na nÓg PJ Lynch, writer Roddy Doyle, and a host of other artists who work with and for children. The Ark’s Children’s Council will present a short film they have made for the event, and they will be documenting proceedings as well.