Saul Williams: A poet who generates his own electricity

After Williams recited his first poem on stage in 1995, his ascent was rapid 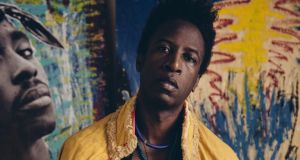 Saul Williams: “I started to earn money from reading poems. I didn’t even know you could do that.” Photograph: Geordie Wood

Struggling for recognition never came into it for US poet, writer and actor Saul Williams. On a dodgy phone line from Paris, a city he lived in from 2009 to 2013, Williams says that there was no transition from pauper to prince, and as for trying to be heard as a poet back in the mid-1990s – well, there was no question of that.

“I was in graduate school for acting at NYU when I started writing poetry,” he says over the crackle and buzz. “I actually happened upon an open-mic night in the city. It was a place where a lot of people were experimenting with language, performance art and writing, and so I found a community in Brooklyn that was fun to participate in. From that night onwards, a lot of doors opened for me.

“So the idea of trying to be heard or recognised for anything in particular, no, not that. It was more participating in something cool. From then onwards, it was getting recognised and realising that what I was involved in was something bigger than I had ever imagined. The turning point was the night when I first read a poem aloud.”

He knows the exact date – “March 16th, 1995” – because he recalls he had only one poem to his name. Amethyst Rocks, an examination of racial identity in a systematically corrupt society, was Williams’s game-changing moment. When he finished reading the poem in the tiny New York cafe, someone came up to him and asked if he would like to be the opening guest at an Allen Ginsberg reading.

For someone who had never intended to forge a career as a poet, Williams admits the response to his debut poetry reading-cum-performance was more a present than a surprise. “I even started to earn money from reading poems,” he says, laughing, “which was something I didn’t understand. I didn’t even know you could do that. I found that vastly satisfying because it was something I would have done regardless of payment.”

Williams the poet quickly turned into Williams the performer, and his appearance at this year’s Lingo Festival is quite a coup for the organisers. He is renowned as much for his words as his delivery, and not every spoken-word artist has a background in acting.

The irony is that Williams got his first recognised job as an actor (in 1998’s Slam, the Grand Jury Prize winner for a dramatic film at that year’s Sundance Film Festival, and the Cannes Caméra D’Or) because the film’s director, Marc Levin, saw him at a poetry reading and thought that he could not only act in the film but also help write it. “Discovering poetry, and it instantly connecting with acting – the thing that I had been doing my entire life – put me in an interesting position.”

From that point on, he says, his development as a poet progressed naturally. He was, however, just as interested in developing the performance of poetry on the page as on the stage.

“I was never comfortable with the idea of writing poems that did not have a life on the page, so I spent a considerable amount of time studying, reading and writing poetry before getting to the point where I knew they were cool for the stage.”

Inevitably, music began to run in parallel with poetry, and before long Williams was sharing stages with the likes of Nas, Erykah Badu, Blackalicious, Nine Inch Nails, the Mars Volta, the Roots, Zack de la Rocha and De La Soul. His audience was broadening, and he shared with the musicians a political activism that informed and invigorated his work.

“The social issues that I touch through my work are basically the things I consider interesting enough to talk about,” he says. “They hold the weight that makes the work more solid. If I were a playwright choosing a topic to write about, I’m sure that I would touch on heavy or difficult subjects as well. I guess it has to do with making sense of the time we spend labouring over a sentence or song. It also has to do with the art that touched me as a kid. I grew up on artists whose work was committed to social causes and working people: from Paul Robeson and Pete Seeger to Nina Simone, Odetta, Public Enemy . . .”

Does his work provide creative fuel for people to start their own fires? “That’s the purpose of it. I’m working to provide an alternative energy source. For years I’ve circulated around the idea of building a generator: something that people could be charged by.”

Ultimately, he adds, he is looking for ways to “talk about all the things dear to me without preaching, and with the freedom to approach it in ways beyond my moral compass”.

Williams provides a heady mix of words, action, music and much else besides. He works to a hectic schedule, and has no apparent desire to relax. “I truly wish I could use my mind even more efficiently,” he says, seconds before the phone line fizzles into submission. “Mind you, much of my work in music, poetry and performance is intuitive. It is not the product of thinking or overthinking, rather it is the product of listening.”

Open mic with a difference as Cork-based spoken-word artist Carl Plover hosts and features in an interactive event that showcases poets Ailish Kerr, David Lee Morgan, Kevin P Gilday and any audience member who cares to join in.

UK poet McNish is a former winner of the Glastonbury Slam. Her acclaimed poems include Mathematics and Embarrassed (and too many more to list here). Expect forceful delivery and words that genuinely hit home. Also, keep an ear out for Elaine Feeney, a Cúirt Grand Slam winner.

How do I get my child to read books with more words and fewer pictures?
5

Blood: A disappointing journey into the Irish psychosphere
7