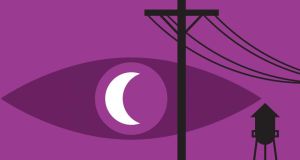 Welcome to Night Vale: leave your scepticism at the town limits, because this is a community with a difference. Taking its cue from TV shows like Twin Peaks, Northern Exposure and The Twilight Zone, stories of the fictional American town's strange characters (and even stranger occurrences) are relayed via Night Vale's local radio "news reports", which has been running as a hugely successful podcast since 2012. The bi-monthly missive's blend of droll humour and off-the-wall plotlines has ensured an ardent fanbase, many of them in the audience tonight: one woman has even fashioned a "glow cloud" out of an umbrella and a string of fairy lights, while others don the imagined outfits of their favourite characters. Indeed, its growth in just two years has encouraged creators Joseph Fink and Jeffrey Cranor to bring the show on the road, and tonight's Dublin gig is the first in a string of live European dates.

Following a shaky opening set by British musician Mary Epworth, Night Vale's dapper narrator Cecil Baldwin takes the stage to set the scene for the show's standalone primary storyline: the townsfolk are being terrorised by librarians, but not as we know them: Night Vale's librarians are reptilian "book-loving monsters", who give off an odour of "burnt coffee during a sinus infection."

Baldwin's theatre background sees him command the storyline with ease, occasionally introducing humorous tangents and supplementary characters – primarily creators Fink and Cranor in different roles – to the stage. Yet with a sparse set-up of just three microphone stands on an empty stage, no visuals and the barest of lighting and sound design, atmosphere is minimal. Could a simple radio station set have worked? Perhaps even a spotlight here and there? The intriguing world of Night Vale may be up to individual interpretation, but its translation onto stage lacks the compelling nature of its podcasted counterpart. More than anything, it seems like a gargantuan missed opportunity. We'll see ourselves out.