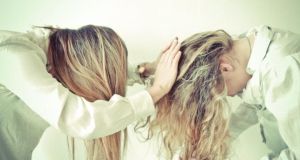 “The well rested terrorist sleeps on a plane,” begins alt-pop musician, Maud Ní Riordáin. “They say his heart’s not in it and he’s doing it for the fame.” So begins a musical meditation on performance, where an electropop gig framed as a theatre piece summons up relationships and realities in break down. It’s an ambitious undertaking, directed by Zoe Ní Riordáin, which replaces the spontaneity of a concert with genre switches, choreographed set pieces and stark, stylised motion.

This could easily tip into a halting cabaret, but Maud Ní Riordáin is a striking, controlled presence with a pristine voice, and together with actor/singer Rory Fleck-Byrne, they coolly peel back a world of surfaces on songs such as She’s an Actress, Odyssey and Je Suis Contente. A little ironic aloofness goes a long way – videos of abrasive therapy and excerpts from Oliver Sacks’ Musicophilia are conceptually arresting, but feel inconsequential – while the stagecraft often takes more risks than the songcraft. Yet it is always absorbing; a painstaking work, given startling execution.

Brian Moore: ‘There are those who must flee Ireland to see Ireland plain’
10