How do you root for an underdog when he is destined to be eaten by the rest of the characters? 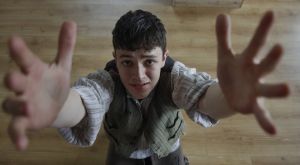 Patrick O’Brien, an impoverished teenager from Limerick who escaped the workhouse in 1835 to become a ship’s apprentice, never seemed likely to make it into the history books. But don’t underestimate the power of hard work and the guiding hand of fate. During a roiling time on the Francis Spaight emigrant ship, Patrick won the recognition of his captain and crewmates, and when the ship was capsized, stranding the men at sea, they all turned to Patrick. They decided to eat him.

The subject of Gúna Nua and Verdant Productions’ show, which premiered last year as part of Limerick City of Culture and has now been revived for a shipshape tour, would make for an unlikely musical – if there were ever such a thing as a likely musical. The more challenging aspect for writer Mick Finn and composer/lyricist David Blake, is what role to assign to this cabin boy: tragic hero or luckless victim? What should we feel, in other words, for somebody destined to become dinner?

Director Paul Meade establishes an engagingly buoyant tone from the point of embarkation, aided by a fleet design from Colm McNally and Emma Fisher moored somewhere between docks, ship deck and ominous chasm. A sprightly ensemble includes the Brad Pitt Light Orchestra as player/performers, weaving between multiple roles. Stephen O’Leary gives a charming performance as Patrick, an innocent with a pinch of gumption, who torments the conscience of Enda Kilroy’s admirably gruff Captain Gorman (“Did I struggle much? Was there much blood”).

But both Finn and Blake are inclined to bleed for the underdog. Finn’s book, which divides the narrative a little needlessly into several chapters, makes Patrick a pawn of cruel fate, from a first ill-omened coin, through every discovered “custom of the sea”, until his final short straw.

This has some sharp agitprop potential. Measured out between Damian Devaney’s heartless Francis Spaight (who also plays a sympathetic cook) and Susannah de Wrixon’s beautifully voiced, despairing mother, the poor always suffer worst, here foreshadowing centuries of injustice to come. Yet it limits the palette of Blake’s music, where the occasional energy of sea shanties and a storm of rock eventually ebb into more consistent laments. They’re often lovely, but they don’t propel the narrative and the second act in particular – a depiction of enervation, desperation and bullying hierarchy – might have benefitted from a less reverential jolt of grisly humour. Comedy, as they say, is tragedy plus time.

But that won’t chime with the treatment of “our hero”, as the narration unswervingly regards Patrick. It means that his story loses more piquant flavourings, but at least the kid has been finally well served.