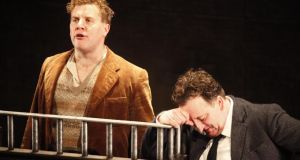 That Brendan Behan’s classic memoir can concern itself with IRA bombings, prison life, casual violence and wartime death yet still end up as a rollicking show is due less to the writer’s posthumous status as doomed comic sage than to Frank McMahon’s stage adaption. Used as the basis for this impressively staged production, the 1967 theatre version is so frenetic that it leaves little room for reflection or subtlety.

That said, director Conal Morrison brings an impressive dynamism to his production, as do his cast. Gary Lydon, playing the older Behan, does a note-perfect impression of the laconic, bedraggled writer of later years, but his part seems somewhat constricted. Peter Coonan, as the younger Behan – the would-be republican bomber who ends up in a British borstal – has more scope to flesh out his role, which he does with some aplomb. The rest of the cast deliver rousing performances. Ronan Leahy and Charlie Hughes combine as a cartoonishly menacing duo of warders, and seasoned actors Michael James Ford and Darragh Kelly have reliable turns. Diarmuid Noyes is particularly good as Behan’s “china”, Charlie Millwall, with their faintly ambivalent friendship poignantly portrayed.

The large number of revolving roles and the blizzard of 1940s-styled regional British accents mean characters sometimes come across as ciphers, but the largely young cast possess a compensating energy. Similarly, the setpieces are imbued with a sense of teeming movement that evokes the chaotic energy of wartime Britain and the charged atmosphere of incarceration. There’s a lot of music too, with singalong routines capturing the camaraderie of prison life while giving off the air of an anarchic revue show.

All the while, the proceedings are dotted with seaside postcard humour and cheerful republican exhortations. Coupled with the Ealing studio-style voices and musical numbers, it means the whole affair is ultimately a cheeky but essentially innocent romp: Carry on up the Ra, if you will.

Dermot Kennedy: ‘You can stay credible without forgoing success’
9