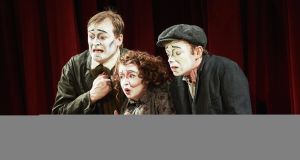 “It is not about the plays, it’s about the building!” So insists Willy Hayes, cofounder and resident playwright of the Irish National Theatre of Ireland, as he tries desperately to guard its future against a calamitous opening night in 1904. If that line brings the house down at the actual national theatre, nearly 13 years since the debut of Corn Exchange’s marvellous creation, it’s because it is now about the play and the building. Together at last.

Michael West’s witty and nimble alternative history of the founding of the Abbey, developed with its original ensemble, was first staged in parallel with the national theatre’s own blighted centenary, by a company on the outside looking in. Today, at this close proximity, director Annie Ryan’s production is razor-sharp, yet it seems surprisingly fresher and more affectionate towards its inspiration.

It helps that the performance, delivered in Corn Exchange’s head-spinningly energetic version of Commedia dell’arte, finds an artful correspondence with the world of the characters. Whether these fantastic actors briskly summon up a squeaking trolley, a spooked horse, a street riot, or an unpleasant squelch on the cobblestones, just as the Yeatsian playwright and his company struggle to create a mythic play “for Ireland”, the delight of the show is to see people building up their world right in front of you.

Play within the play

The Wooing of Emer

The show, nonetheless, warmly interweaves art and life. The cast narrate their actions, like Joycean fugitives, conceive of reality in poetic or theatrical terms, burst periodically into song, and are embraced, throughout, by Conor Linehan’s deft piano, essentially another character.

It’s cheering too to see how the collaboration has developed. Of the original cast, the brilliant Louis Lovett is somehow even more dexterous as William, joyfully stepping in and out of the play (no mobile phone interruption has ever been as generously handled). Karen Egan’s aristocratic, suffragette nationalist, a surrogate Maud Gonne, pokes wry fun at political postures without sneering at them. Paul Reid excels as the precious actor, a Wildean throwback tiptoeing through dear dirty Dublin, and new recruits Colin Campbell, Gus McDonagh and the exceptional Caitríona Ennis all step sprightly along Corn Exchange’s trail.

That they belong, so exquisitely, to a tight-knit theatre company, underlines the sympathies this play has for its dreamers, real or imagined, determined or desperate, who would like to conjure a nation into being, but might settle gladly for a two-week run. “We wanted to say something,” protests Willy, with touching simplicity, when everything has gone horribly wrong. You should see it, for his sake, and for Ireland.

Fintan O’Toole on Tim Robinson: ‘One of the greatest writers of lands’
3

Bravo! The winners of the 23rd Irish Times Irish Theatre Awards are here
5

Troubles to Trump: ours is a time of disordered minds
10