Fintan O'Toole visits the cell where Wilde was imprisoned, and finds it haunted by the ghosts of more anonymous victims 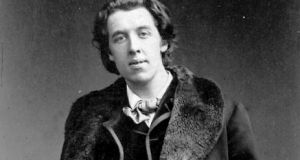 Oscar Wilde wrote to the Daily Chronicle about the dismissal of one of Reading Gaol’s warders for giving a young child, imprisoned for poaching rabbits, a biscuit.

“Where there is sorrow,” wrote Oscar Wilde in De Profundis, the long letter he wrote in Reading Gaol, “there is holy ground.” Sites of suffering can indeed become sites of pilgrimage.

Wilde, “crushed by anguish, bewildered with terror, dazed through pain”, can scarcely have imagined in his darkest days that this would become literally true of his own cell.

I was in it recently, on a bright autumnal Sunday morning just like the one Wilde may have imagined when he wrote: “Outside, the day may be blue and gold, but the light that creeps down through the thickly-muffled glass of the small iron-barred window beneath which one sits is grey and niggard. It is always twilight in one’s cell, as it is always twilight in one’s heart.”

The innovative English public art company Artangel has been occupying Reading Prison (as it is now called) since July.

Its Inside project was due to finish at the beginning of September but it has proved so popular that it has been extended until December 4th.

But there is no doubt that Wilde’s suffering is the magnet that has drawn in both these artists and the crowds – myself among them.

It is the vestiges of the Irish writer’s terror, humiliation and anguish that we seek to trace. We want to catch some intangible, but lingering, psychic presence.

And this, itself, is a further irony.

The horror of the system Wilde endured between 1895 and 1897, when he served his sentence for gross indecency, was all about the idea that nothing should be caught by anyone.

It was called the Separate System. Since criminality was deemed to be a kind of contagion, the prisoners were kept alone in their cells for 23 hours a day.

Prisoners were not to speak a word to each other.

They were not even to look at one another – they were hooded when they left their cells to prevent eye contact. And, yet, the very place where this system was perfected is now a kind of spectacle.

There are, in fact, two versions of Wilde’s cell in the prison.

For one, created by the artist Jean-Michel Pancin in the chapel, the original door to Wilde’s cell stands at the head of a low concrete dias that replicates the floor of the cell itself.

But the other is the actual cell, C22, on the first floor – where Wilde spent those long days and terrible nights.

I stood in it for a while because I had gone with Colm Tóibín, who was later to be locked in while he read De Profundis aloud. (Visitors could peek in at him through the spyhole and then watch him live on a screen in the chapel.)

Both versions of the cell feel at once real and invented, for even the real one is saturated with our imagining of Wilde writing on a crude wooden board. Even with its modern electric light, we feel that we are in his twilight, a never-never land between now and then.

Is this a kind of trauma tourism, a vicarious indulgence in other people’s pain? It could be. The pilgrimage to the holy ground of sorrow could end up merely aestheticising suffering.

What saves the experience is the shock of realising that Wilde’s cell is not a museum – it was a working prison cell up until 2013 when Reading Prison was used to incarcerate young offenders.

The space is the same as in Wilde’s time but it now has a dingy sink and toilet and a battered metal desk. The recent additions don’t make the place less haunted – they make it more so because they remind us that there are so many other ghosts on these cold metallic corridors.

The artworks that draw visitors into other cells – such as Marlene Dumas’s brilliant portraits of Wilde and his shifty-looking lover Alfred Douglas or Vija Celmin’s cosmic prints that bring stars to this human gutter – reinforce this thought.

One begins to think of other lives lived here.

Wilde was broken by Reading Gaol, but he was also awoken. He heard from his cell the shrieks and howls of a mentally ill man being flogged in the yard outside.

His heart was torn asunder by the sight of three boys imprisoned for poaching rabbits.

He wrote to the Daily Chronicle about the dismissal of one of the warders for giving the youngest child a biscuit: “a tiny little chap for whom they had evidently been unable to find clothes small enough to fit”.

He was so moved that, even in his own misery and poverty, he managed to find the money to pay their fine for poaching and get the children released.

In The Ballad of Reading Gaol, written after his release, Wilde described the sensation of being told that a fellow prisoner was due to hang: “And, though I was a soul in pain/My pain I could not feel.”

Even in the depths, we can see and hear the pain of others. Wilde defeated the Separate System by hearing the cries that were all around him.

The moving thing is that even if we go to Reading Gaol, to pay homage to his solitary suffering, he leads us toward the anguish of others.