One for the Road review: A miniature study of terror and torture

Harold Pinter’s vicious play is all about the oppressors. How can cruelty and civility sit so comfortably together? 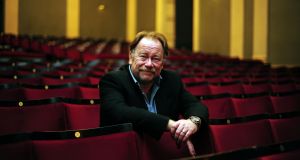 Owen Roe finds something close to charm in the brutal character of Nicolas. Photograph: Aidan Crawley

The last Gate Theatre production of Harold Pinter’s short, effective study of torture and terror starred the author in the leading role of the sinister demagogue, Nicolas. In this new production, directed with efficient restraint by Doug Hughes, Owen Roe plays Nicolas, finding something close to charm in the officer’s civil brutality.

In the terse 30-minute dialogues that structure the one-act drama, Nicolas’ mannerly interrogations are the dominant voice. His observations and questions range from the mundane – “Do you like Cowboys and Indians?” – to the threatening: “Despair, old fruit, is a cancer. It should be castrated. Indeed I’ve often found that that works. Chop the balls off and despair goes out the window.”

However, Nicolas reveals himself most clearly in his preoccupation with his victims’ eyes. “The soul shines out of your eyes,” he says on three occasions. Roe’s eyes, lost in the folds of his fleshy, craggy face, cannot be seen by the audience, but the effect of their unflinching gaze upon those around him brings the disturbing power of this miniature study of menace to visceral fruition.

Nick’s three interlocutors, meanwhile – Victor (Shadaan Felfeli), his wife Gila (Rachel O’Byrne) and their son Nicky (Pharell Evenor) – are almost silent and refuse to meet his eyes. The audience, too, are denied a frontal glimpse of their fear. One for the Road is, after all, not about the victims but the oppressors. How can cruelty and civility sit so comfortably together?

Pinter wrote the play in “a fit of rage”, but the most remarkable thing about it is its restraint. The physical and sexual violence may happen off stage, but the horror is palpable. The political message is similarly both oblique and clear. The unspecified setting – lit with the greenish, grim light of bare bulbs by Sinead McKenna – allows us to imagine it unfolding in numerous contemporary contexts. Indeed, Nicolas’ British idioms and recognisable mannerisms allow us to imagine it unfolding close to home. Thirty years after its London premiere, One for the Road’s potent political message remains as chilling as ever.