Docklands site ripe for reinvention as place where heritage, culture and enterprise meet 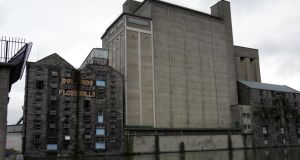 Boland’s Mills is an iconic site with huge historical resonance in the heart of a booming business and cultural district. Within a stone’s throw of the European headquarters of Google, Facebook and LinkedIn and cultural landmarks including the Lir Academy, Bord Gáis Energy Theatre and the Waterways Museum, in the transformed south docklands district, this site is ripe for reinvention as a place where heritage, living culture and enterprise meet and the past and future collide into the present moment.

Earlier this month, a €150 million redevelopment plan for the site, featuring offices, apartments and shops, was lodged with Dublin City Council by Nama.

There is no doubt, in the current property and homelessness crisis, that more homes in Dublin city are required. However, as someone whose job relates to our society’s cultural health, I wonder if this is the best of use of such an iconic site. If, as a society, we decide to develop buildings in the same way we did pre-2008, should we expect different results? Looking at the still empty ground-floor units in Smithfield Market and Herberton (formerly Fatima), it seems developers and planning authorities need to take a different approach.

This set of buildings has always inspired me. So too has the idea that subsidised art and culture might coexist with business, creative industries, leisure and heritage tourism, in an exchange of financial and creative resources that are mutually beneficial.

We are currently in the throes of a “decade of centenaries”. As a cultural producer, I have dreamed of a large-scale project that could deliver opportunities for architects, engineers, designers, researchers and historians, artists of all disciplines and craftspeople. Most importantly, it could create a tangible legacy for the city and people of Dublin.

Ireland’s number one tourist attraction is the Guinness Storehouse. It is the fourth-largest brand visitor attraction in the world and visitor numbers are increasing annually. I’m hopeful that all those visitors and more might also engage with a different Dublin, one brought alive by artists, visionaries, the best of Irish history scholars and the brightest local folk voices.

Boland’s Mills is the perfect site for a museum of revolution. The building on the corner of Barrow Street and Pearse Street is commonly misunderstood as the last stand of 1916 (which occurred in the old Boland’s Mills site on Grand Canal Street, currently home to the Treasury Building and, of course, Nama), but that misconception is an asset to this project, allowing the building to take on different, complementary and ultimately transformational roles.

This would be a place that celebrates and interrogates our revolutionary history, centred on the 1916 Rising. This place would lead the way in terms of innovative approaches to exhibition design and experience. This would not be a museum of inanimate objects, relics and the AV room, but a place where history is brought alive and viewed from many vantage points.

Inspired in part by the design and vision of Mona in Hobart, Tasmania and the Tenement Museum in New York City, the theatre practice of Anu, Macnas and Druid, the visual art of Dorothy Cross, Mark Garry, Michelle Browne and street artist Maser, the poetry and prose of Yeats, Heaney, Kevin Barry and Roddy Doyle would play a key role in the development of a thrilling museum experience for Dublin.

Boland’s Mills also offers a unique opportunity to address a gap in arts provision in Dublin. During the boom, dozens of arts centres were built across the country. While these are fantastic assets to local communities, they are similar in scale and little was done to address the lack of adequate arts spaces in Dublin city centre.

As director of Dublin Fringe Festival between 2008 and 2013, it quickly became apparent that the capital’s infrastructure is sorely lacking in providing spaces to accommodate large-scale events across artistic disciplines.

Every year, every major arts presenter in Dublin has the same search to find a large, dark warehouse, with adequate power and facilities capable of holding big projects.

What is needed in Dublin is a space that can accommodate large-scale work of a highly technical nature. We need a space that rivals the Armory in New York or the Turbine Hall in London. No such space currently exists – the massive physical scope of Boland’s Mills is perfectly placed to become it.

Last week, Manchester City Council announced it was getting £78 million to create such a space as a home for the Manchester International Festival. The same courage and vision should be applied here. Now is the time to think about the legacy of these centenaries and place a value on the culture that marks Ireland apart. Boland’s Mills is a great place to start.