Christopher Marlowe’s death is pulled apart in this perplexing performance 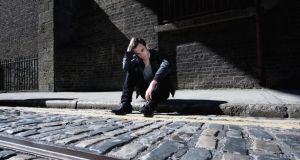 The Secret Art of Murder

In this perplexing production, Five Gallants perform an inquest of sorts into the death of Christopher Marlowe, while attempting to draw analogies between Marlowe’s legend as artist, conspiracist and government spy, and modern-day phenomenon such as the Anonymous and Prism. The point, in director Conor Madden’s words, is that “we’re not living in enlightened times. We are living in the high tech middle ages.”

The show opens with an a cappella version of Sympathy for the Devil, and the fourth wall is pulled down from the the outset, with Rob McDermott warning in portentous tones of what’s in store.

What follows is almost a monologue, with McDermott dominating as Marlowe. Most of the script is in rhyme, in reference to Marlowe’s blank verse, broken up with sudden, brief slots of contemporary dialogue; off-stage prompts hurry the action along, and actors on stage break character to bicker about the plot; the direction feels chaotic, while shifts in lighting often leave the action in the dark. This mix of the period and the modern continues into the scene of Marlowe’s demise: one character hums a videogame-style fight scene tune, while all concerned strike Bruce Lee poses.

The intent, no doubt, is to unsettle and challenge an audience with clever theatrics and literary wit. However, the allusions are glib, too often the execution is clumsy, and the dense script often buckles under its own weight.