The activist-comedian brings his new show to Dublin next week. Here’s a sample of what to expect 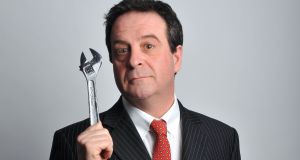 Mark Thomas is a unique voice in British comedy, using protest, anarchy, campaigning and humour to make his point. His new show, Trespass, tackles how public spaces get taken over by private interests, corporations, building companies and gated communities, and what that means and how we can play with it.

“It’s in a particular state of vileness at the moment. It is at a crisis point, and it’s turned into the hollowed-out shell of bourgeois cack . . . What’s happening in London makes me incredibly angry, and you don’t feel part of the place. This is the thing that developers don’t understand: where we come from, and the communities we’re part of, informs how we view ourselves and forms part of our identity. I walk around bits of London and I just loathe it.”

On charging for playgrounds

“The area I live in, nearby is Battersea Park, and they’ve sold off the adventure playground that’s in there. Now I used to charge around that place, and you’d make friends with whoever was in there with you. Now they’re charging 18 quid to get into the adventure playground. So it’s for parents who can afford 18 quid, and the only people who’ll meet each other will be other people who can afford 18 quid. Of course, there were petitions and all that, but they didn’t work.

“What we’ve actually got to do is roll back 36 years of privatisation. Thirty-six years ago, if anyone considered selling off a public park, it would be considered a weird, Nazi, extremist thing to do. But that’s what’s happening.”

“If Boris were to fall off a zipwire tomorrow, it would be a major victory for humanity. This is Boris’s London, and it’s about more and more gentrification . . . Boris is a nasty piece of work. People say ‘good old Boris’, [but] he is an opportunist who only exists for Boris.

“People’s ability to join in was the great thing. That was the whole point of the thing, what happens outside. Otherwise, you’re just a piece of bourgeois entertainment happening in a theatre. You might as well be some awful Ben Stiller s**t spewing out of a screen.”

“We did a show in Exeter and the council are trying to push through this public-space protection order in which they can confiscate homeless people’s sleeping bags. They wanted us to behave like a lynch mob, so I said let’s behave like one. So we had 200 people come out to the council building with pitchforks and flaming torches and jackets that said ‘lynch mob trainee’ on them. We go there, people join in, people photograph it . . . I wake up the next morning and the council are trying to reach me and the press are trying to reach me. The council is then on the back foot, and it looks like we’re going to win.”

On the power of protest

On the refugee crisis

“People are fleeing from a war that we are now involved in, and three years ago we were talking about fighting on the other side. It’s an utter outrage that we’ve ceased to care that thousands of human beings are fleeing from a conflict. We have to welcome them because that’s what being human is. The Labour government tried to do that [make refugees hand over their belongings] in the UK under Jack Straw. They tried to make asylum seekers sell anything of worth that they had. I was sitting in a room when Diane Abbott said that she would make asylum seekers do that. The reason these little bureaucrats and thugs do this is because, ideologically, they think we need to be tough on immigration. So they take that position and they end up acting like thugs. They cede to the ground of racism . . . I think: shame on us. Shame on us. Shame on us. Shame on us for not getting a boat and going over and picking them up.”

On Ireland’s tax laws benefiting huge corporations such as Apple

“You should be paying tax where you’re working. This whole idea that if you lower tax then that will attract investment and create employment, all you’re doing is creating a race to the bottom. I’m very critical not just of Ireland but also the City of London’s set-up. These people think they can get away with not paying their bit. Tax and democracy are the only things that f***ing civilise the rich. We’ve got to have them for their benefit.”

Róisín Murphy: If I want to be famous I can just go to a gay club
7