Marina Carr: ‘How wonderful to burn down the whole world’

There’s a terrifying rage in her play ‘By the Bog of Cats’, which is reopening at the Abbey Theatre – and it’s an anger as old as the Greeks 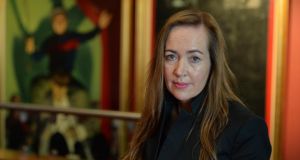 Marina Carr: “If society is always saying no to you, that rejection has to go somewhere. It turns dark, and it erupts. So you have all these raging middle-aged women.” Photograph: Sara Freund 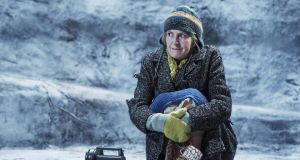 Back at the Abbey: Jane Brennan in Selina Cartmell’s new production of By the Bog of Cats. Photograph: Ros Kavanagh 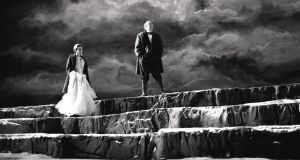 First run: the Abbey’s original staging of By the Bog of Cats, with Olwen Fouéré, in 1998. Photograph: Amelia Stein

Over the course of a dozen plays since the absurdist gender-bending experiment of Low in the Dark, from 1989, Marina Carr has developed a voice that combines the eerie humour of Samuel Beckett with a fondness for the emotional depth of Greek tragedy.

The trio of plays she produced in the mid 1990s – The Mai, Portia Coughlan and By the Bog of Cats – explore the profound personal drives and attachments that motivate all great tragedy, finding an ancient intensity amid the bogs, rivers and plains of her native Co Offaly.

Those early plays were inspired by the works of Sophocles and Euripides, and in conversation Carr’s love for those ancient storytellers is obvious. Although she speaks very softly, worrying at one point that the recorder might not pick up her voice, she lights up when talking about the classical masters.

Seventeen years since its premiere at the Abbey, By the Bog of Cats has returned to the National Theatre, with Susan Lynch stepping into the role of Hester Swane, first played by Olwen Fouéré. Swane’s irrepressible personality is the play’s driving force, a firestorm of contradictory emotions breaking across the stage in waves of love and fear. Her fierce attachment to her home, to her family and to her way of life comes up hard against the desires and prejudices of her community. As dark as the play is, it is also tender and funny in its attempts to represent a spectrum of human experience much broader than its characters’ accents.

“I think there probably is a hunger out there for huge stories, huge emotions,” Carr says. “Complex women. The Greeks wrote fantastic women. I always say they were the first feminists. Huge, huge, and the complexity of them in a way that has pretty much been denied in a lot of literature, a lot of contemporary writing. Not that it has been denied, but it doesn’t get heard as much as the other stories. I think there is a hunger for that out there.”

“The rage in women is terrifying. The rage of Hester Swane is terrifying,” Carr says. “The rage doesn’t come out of nowhere. The rage comes out of being said no to just one time too many, where you should have been said yes to, if the world was fair. And you’re into conversation about parity here, and equality. If society is always saying no to you, that rejection has to go somewhere. It turns dark, and it erupts then. So you have all these raging middle-aged women. Probably myself included. Fuming.

“There’s lots of men raging around the place, too, but male rage has a different quality. It’s less self-destructive. Women’s rage turns inward most of the time. How wonderful to be able to burn down the whole world. Even if it is only a stage. Revenge.”

By the Bog of Cats is written and performed in a strong midlands dialect, and much of the work’s character comes from this setting. Carr’s ear for the rhythms of speech found in her home county is deeply evocative. Details such as the unrefined rituals of what she calls “a bog wedding”, or the bitingly sarcastic midlands humour, make the characters believable. Through the way they walk, the way they talk, the objects they use and hold dear, the deeper concerns of family, blood and land slowly emerge. This tangle of landscape, community and individual desire makes for awful knots, creating bonds that are nigh on unbreakable.

“Place is so saturated with memory,” Carr says. “Landscape by itself can be very powerful, but I think people tend to associate landscape with the ones we love. They’re factors of weight and resonance, and that influences where we want to be. We’re not meant to be solitary, I think. We don’t function very well in solitary. At times, obviously, you need it. But the idea of belonging – to a tribe or a place or a family – that’s one of the things we are really good at here. The familial, the claim of that.”

When By the Bog of Cats first opened, some critics took umbrage at the play’s isolated setting, finding all this rural mysticism a bit unrealistic in the era of globalisation, the internet and the Celtic Tiger. Now, teaching in the English department at Dublin City University, Carr fields questions from a new generation of readers wondering if Hester Swane might be in need of medication.

“I get a lot of American students saying, ‘Is Hester bipolar?’ ” she says, laughing. “She may be, but that’s not the point. I don’t think she is. I think she’s probably the most reasonable of all of them there. She’s been handled terribly. The idea that, if she was on the right drug, none of this would happen – God almighty. You just think, If you believe that, I just can’t have a conversation with you.”

“This idea that we’re rational creatures I’ve less and less time for as I get longer in the tooth,” she says. “We’re not laws. There’s reason there, and everything reasonable says, ‘You must do this, you must do that,’ but the heart and soul is rebelling all the time. I don’t want to. This is my life. This is my connection. It’s who I am. It’s how I define myself, what I’m attached to, and really I’d rather not be alive than lose it.”

Most importantly, Carr’s characters are never judged; the audience is always left to make up its own mind about what it has seen.“I never had any answers. I don’t think I ever set out a moral or explored a theme or anything. For me it would always be the human starting point, and what’s going on between people. You put two people in a room, you have a scene and you potentially have a play. What you’re going to have is difference. How are you going to negotiate that? There are good ways to navigate that and, as we all know, there are terrible ways to navigate that.”

Carr says she recognises in the great writers of the past “a love for people, for the human condition, the fragility of it”, through which the best stories can come alive. She cannot fling the likes of Hester Swane in the ash pit. Instead Carr gives all the rope she can to those who are oppressed and hounded – even if, in the end, it’s merely enough for them to hang themselves.

By the Bog of Cats is at the Abbey Theatre, Dublin, until September 12th. Marina Carr’s version of Hecuba, for the Royal Shakespeare Company, opens in Stratford-upon-Avon in September

Marian Keyes: ‘I thought when I stopped drinking my life was over. It was just beginning’
7