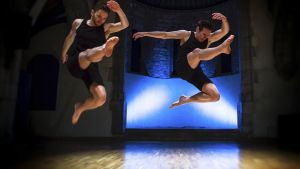 Publicity photographs rarely embody the theatrical creation they are selling. Glitzy pre-production images can mislead, just like the empty white sand beaches of holiday brochures, by promising an air-brushed experience that is impossible to replicate onstage. Also, the now-you-see-it-now-you-don’t nature of dance means that one image is often just a fleeting moment within an hour of movement.

In publicising Linger, choreographer Breandán de Gallaí uses an image of himself and fellow dancer Nick O’Connell chest to chest with their heads flung back. It appears during the performance, projected on the back wall, and perfectly sums up the choreography. In one moment there is defiance and power behind the thrown-back head , a proud living in the present. But there is also repression in the image, a closed-eye uncertainty and vulnerability to outside forces.

Linger skilfully manages these contradictory tensions that lie at the heart of human identity. Although a furtive and tentative ritual dance of gay courtship is presented on screen, the work has a universality that resists any one reading. Similarly, the jessant buoyancy of Irish step dance is weighed with earthy darkness; gravity itself becoming an overpowering strain that drags the body and spirit downwards to near submission.

De Gallaí deliberately juxtaposes his own 44-year-old body with O’Connell’s younger body by dancing in unison and highlighting contrasts between considered experience and unbounded youthfulness. The contrasts are not always apparent – de Gallaí still has fantastic technique and a commanding presence onstage – but differences emerge in smaller details, like de Gallaí’s eyes reflectively focused downwards and O’Connell’s impulsively facing frontwards.

Tours to Firkin Crane, Cork on January 29 and Dance Limerick on February 4