Kid's Christmas: Tracks in the Snow at the Ark 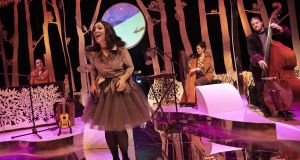 Tracks in the Snow ***
The Ark, Dublin

Tracks in the Snow is a seasonally themed concert for children of all ages by Irish folk trio the Henry Girls. The songs take their inspiration from winter, and, mercifully, there is barely a mention of Christmas at all. Instead, we get a musical ode to icicles and hot chocolate, brought to life on a variety of traditional and classical instruments, and by the honeyed voices of Lorna, Karen and Joleen McLaughlin, with David Redmond on double bass. The audience are quick to catch the simple melodies and are encouraged to sing along. The staging, by designer Sinéad O’Hanlon, is a pop-up silhouette come to life, with various forest animals camouflaged within its canopy. A reflective floor creates a wonderful ice rink for the sledding song, and Niamh Lunny’s inspired costumes draw inspiration from the forest, giving the Henry Girls animal characters to inhabit as they move from instrument to instrument in the service of song. The trio have an understated, gentle stage presence that children of a more sensitive nature will warm to. It proves difficult, however, for them to sustain the energy throughout the 50-minute performance, and younger children will probably get a bit restless. The visual elements, however, in particular Sinéad Woods’s animations, should keep older kids in their seats. A refreshing break from the more commercial aspects of the season.