Johnny I Hardly Knew Ye review: profit versus principles in the newsroom 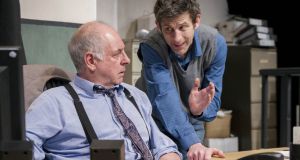 It is a busy day at the Inishshannon Chronicle, a provincial newspaper in a fictitious midlands town whose name looks, endearingly, like a typo. Perhaps it’s no mistake. That “shsh” in the masthead conveys either a quiet life or a tendency to hush things up. “This is Inishshannon, Lisa,” Garrett Keogh’s veteran reporter (and acting editor) Stephen tells Ema Lemon’s eager new recruit. “There are no breaking stories.”

But Jim Nolan’s new play for Garter Lane Arts Centre, essentially a meditation on the shape of the nation as it celebrates the Rising, is lightly metaphorical and stealthily topical. Many stories, like national narratives, will be broken.

It is spring 2016, election time, and following a long proud independence the Chronicle has been acquired by an international media conglomerate, here represented by a sharp-suited figure who could have flown in from a David Mamet play.

“Profit,” says Ciaran McMahon’s Ian, by way of pep talk. “There is no other purpose.” The Chronicle will have to become more sensational, more obedient and less ethical, something Stephen resists, but senior reporter Kate (Jenni Ledwell) pragmatically accepts. Given a recent report by Michael Hayes’s credulous all-round correspondent Lenny on the second coming of Christ, this may be less profound an editorial shift than advertised.

Then again, the Easter Rising would make for a good comeback, and a Fine Gael minister, battling the advance of Sinn Féin, knows it. Inishshannon’s upcoming celebrations of the event involve the unveiling of an even-handed memorial park featuring two figures from “local mythology”, a man who cycled to the GPO in 1916 (but missed the rebellion) and a first World War hero who survived the Somme. While the cub reporter threatens to complicate both myths by digging up the past, the corporate owner prefers to keep them simple to serve political and business interests.

If this sounds complicated, it is. (And that’s before we even get to a dead body and the eviction of a protester.) Nolan’s play, which he also directs, contains a box set’s worth of detail condensed, all elaborately connected, and happening mostly offstage.

One cheering consequence is to reaffirm the value of print media: I would gladly have taken out a subscription to the Chronicle just to keep up. But that overload makes it easy to lose sight of what is important. When Nolan introduces, very late and out of nowhere, a critical new story that might upend the celebration, he seems to admit as much, reaching for a contrived but clarifying device: a scoop-ex-machina.

The dilemma, warmly conveyed by the performers, is really much more straightforward: is this newspaper a place of principles or capitulation? Will it recognise the complexities of history or sanitise them for the sake of expedience? In a newsroom drama, such conflicts are pretty generic, but as a consideration of a nation it’s good for page one.