Dublin Theatre Festival: a powerful, necessary and moving moment of social testimony that doesn’t quite work as a piece of theatre 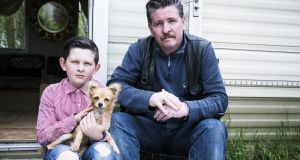 Although Collins is joined at times by his charming son, Johnny, most of the performance is stilted and static Photograph: Al Craig

Ireland Shed a Tear? ★★
The New Theatre
Until 9th October

It would be difficult to deny any of the grievances laid out by Michael Collins at the opening of his new play Ireland Shed a Tear? He begins by offering a social history of Traveller life since the 1960s: how modernisation eroded Travellers’ trades; how poverty drove them to social welfare; how social welfare regulations drove them to the cities, where they were settled in suburban fields without any sanitation facilities. “Do you think any parent wants this for their child?” Collins says when rebuffing overheard prejudice on a city bus. His description of the primitive living circumstances on halting sites is shocking, but it is the subtle details - teenagers refusing to go to school because they haven’t had a shower - that have the most power to transform facts into drama.

Unfortunately, this potential remains unharnessed. Although Collins is joined at times by his charming son, Johnny, most of the performance is stilted and static. Set designer Lisa Krugel evokes the environs of a mobile home and halting site, but the work could as easily be delivered in a lecture hall without any theatrical trappings. The script, meanwhile, under the direction of Anthony Fox, slips between characters and tenses without clear transition. Ireland Shed a Tear? was written to commemorate the first anniversary of the fire in Carrickmines that claimed the life of 10 members of the Travelling community. In the closing moments, father and son stand together, hands clasped but heads raised proudly, to remember the victims. It is a powerful, necessary and moving moment of social testimony and communion, but it doesn’t quite work as a piece of theatre.

Viggo Mortensen: It ‘felt awkward’ replacing Stuart Townsend in Lord of the Rings
2

Balloon couldn’t have landed at a more insulting moment
9