Germans queue up for the Full Irish

In Germany, they love Irish storytelling in song and word. Now, at last, they are paying attention to our plays 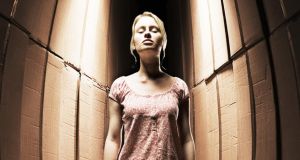 On the menu: the Company’s production of As You Are Now So Once Were We

On a sunny morning in Berlin, at the ungodly hour of 10am, a bunch of young theatre addicts are trooping into the Irish darkness of The Blue Boy .

The mesmerising production by the Irish company Brokentalkers, exploring the history of Artane industrial school, has already been a big success in Ireland. But at Berlin’s Augenblickmal festival of youth theatre the show’s tight web of spoken text, choreography and recorded material is lifted to another level.

At a talk after the show the shell-shocked audience want to know more about the grim subject of institutional child abuse, only now emerging in Germany. It is a moment of theatrical connection.

“Most stories today are only told one way, through the media, and we’ve seen a certain amount of fatigue creep into the abuse story in Ireland,” Gary Keegan of Brokentalkers tells the Berlin audience. “We wanted to express what happened then in a way that people would listen again.”

When it comes to storytelling, Germany has always listened more closely to Ireland than many Irish realise. German bookstore shelves groan under the weight of Irish fiction in translation, from classic and contemporary literature to popular fiction. Onstage, it’s another matter. Samuel Beckett is a stalwart and Enda Walsh keeps the contemporary flag flying. Beyond that, however, things thin out rapidly. Aiming to address this dearth was the Full Irish, this week’s festival of contemporary Irish theatre at the English Theatre Berlin. It didn’t disappoint.

Packed houses greeted the Company’s As You Are Now So Once Were We , Brokentalkers’ compelling Have I No Mouth and Conor Lovett’s take on Beckett’s First Love . The festival, supported by Culture Ireland, also offered talks and staged readings of more traditional plays, alongside an audiovisual installation by JE Murphy and music by Silhouette, both from Northern Ireland.

“I wanted works that showed off the full breadth of the Irish theatre tradition,” says Günther Grosser, English Theatre Berlin’s creative director, who is a regular visitor to Dublin Theatre Festival. “I’ve seen so much good theatre in Ireland over the years and could never understand why it never made the leap.”

He hopes to make the Full Irish a regular event – helping to rebrand his house as a home for international performing arts in Berlin and to bridge the gap between the Irish and German performance traditions.

In Germany, the driving force for decades, at least in the bigger houses, has been director-driven Regietheater , where plays – particularly classics – are often radically reinterpreted to suit contemporary ends.

But times are changing, and necessity, that persistent mother of invention, is mixing up old traditions. Subsidy cuts are opening minds to coproductions with European partners, and English-language productions with surtitles are now common.

In Ireland, theatre-funding cuts may yet catalyse creative young companies to dust off the Irish theatrical canon for the Twitter generation.

Milan Peschel, an actor turned director who is staging a new production of Juno and the Paycock at Berlin’s Deutsches Theater, says greater cross-fertilisation can only enrich theatre traditions in Ireland and Germany that are often viewed as oil and water. “The worst thing for theatre is when it bubbles away comfortably. Better to pour oil into hot water and have it spit all over the place,” he says.

Watching online videos of the recent Abbey production of Juno , he says – somewhat diplomatically – that he was struck by the “historical reverence” for the work. “I’m sure there are people in Ireland, particularly younger actors, who would welcome the chance to provoke with O’Casey as O’Casey did in his day.”

His energetic production of Juno , packed with slapstick elements and Elvis Presley songs, caused a stir in Berlin. Peschel says he would love to be invited to Dublin to see how his Juno plays with a home audience.

For Lynne Parker, artistic director of Rough Magic Theatre Company, Ireland’s young theatre tradition is still evolving. The European element has always been there, she says, but has not always been apparent to all. “Seán O’Casey was a real European who thought outside the naturalistic box at an early stage,” she says.

Parker says a greater shift towards coproductions, and the promise of greater returns on cultural investment, are givens in an era of tighter cultural budgets, though they bring new funding challenges.

She was in Berlin this week with members of Rough Magic’s Seeds programme, which mentors emerging theatre practitioners. Rosemary McKenna, a director in the scheme, did a placement at the Royal Court in London but sees greater potential in Germany. “In London theatre’s either experimental or big budget, never both,” she says. “Here you get both, with a lot of irreverence. That’s exciting and liberating.”

Rachel West, an Irish theatre director based in Berlin, agrees that European theatre’s future will see a shift towards co-operation. But she is cautious about the funding opportunities, particularly a new European Commission financial facility to encourage bank lending into the cultural sector. Many in the theatre world, she says, are concerned that the market-driven, profit-oriented language of the plan will bring with it attempts to dictate the creative content that is being financed.

“What the EU appears interested in doing is getting people from three EU countries to create something together, but you cannot make everything palatable to everyone,” she says. “There remains a cultural difference in what various European audiences want.”

Financing theatre festivals would, she suggests, be a more organic way to encourage creative cross-fertilisation in Europe.

As Irish theatre adjusts to an uncertain future, companies such as Pan Pan have already made the push into Germany. This week’s enthusiastic response to the Full Irish gives heartening hope that despite – or perhaps because of – current economic challenges, the door is ajar for Irish theatre to look to Berlin as well as to Boston.