Mesmerising performance but something hesitant in Barry McGovern’s delivery 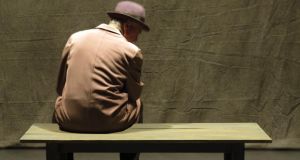 Barry McGovern in Samuel Beckett’s First Love which is being performed in the O’Reilly Theatre as part of the Dublin Theatre Festival. Photograph: Patrick Redmond

Only Samuel Beckett could carve a love story out of excrement. Indeed, his narrator discovers the nature of his feelings for Lulu, a prostitute he met on a bench on the banks of a Dublin canal, when he finds himself writing her name with his shit-stained fingers in a cowpat.

And who is to judge the evolution of their strange courtship: as the narrator says with sanguine resignation in the final line of the short story, “either you love or you don’t”.

Michael Colgan’s theatrical presentation of First Love is a revival of his 2007 Gate Theatre production, which starred Ralph Fiennes.

Eileen Diss’ set offers a dark-clouded scrim against which a white door and window can be traced with a ghostly glow.

In this production, the narrator is the seasoned Beckett performer Barry McGovern. Tall and thin, with a long face and long arms, he inhabits Beckett’s Everyman with a physical ease.

See how the drab, worn overcoat hangs from his body like an empty suit upon a hanger’s frame: the spectre of death is never far away.

McGovern’s voice – a deep, Dublin, gravelly instrument – gives texture to the high and low reach of the prose, with its juxtaposition of beauty and baseness, sweet love and scatological obsession.

There is still something hesitant in McGovern’s delivery, however, as if text and performance have not yet meshed.

The sound, lighting and movement cues are not definitive enough and, although the performance remains mesmerising, there is yet no overall cohesion.

And that is what Beckett was reaching for in this most unlikely of romances, a marriage: “it was a kind of union in spite of all”.

Greed film review: Greed is quite good. But it could be better
10