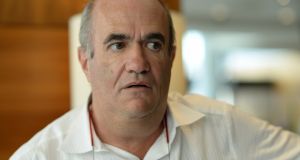 When Colm Tóibín described recent proposals from the Arts Council to make radical changes to the way individual artists are supported by the State as “oddly North Korean”, readers may have been inclined to think he was going over the top. But if we look deeper into what is going on, it really is alarming.

The specific issue concerns the cnuas, the annuity given to needy members of Aosdána. But behind it is something more fundamental: an attempt to change the way cultural creativity is understood in Ireland. The idea is that what artists do can and must be measured as if it were pig-iron production in a five-year plan.

This whole thing has its roots in a 2015 value for money review of the Arts Council chaired by John O’Hagan, professor of economics at Trinity College Dublin. O’Hagan looked at Aosdána through his econometric spectacles and was disturbed by two things. The cnuas is a “demand-led scheme” – its annual cost depends on how many of our most distinguished artists are currently broke. And, even worse, its effects on the annual output of good art cannot be mathematically quantified. As O’Hagan put it “the level and quality of creativity and artistic endeavours that may be attributable to Aosdána members receiving the cnuas is not measurable”. This, from the time, is obviously a very bad thing.

To be fair to O’Hagan, this is just the kind of wrong-headedness you would get if you asked a choreographer to conduct a review of the economics department at TCD. The conclusions would be, as the saying goes, not even wrong. They’re just irrelevant. The report came to a hysterical conclusion about the cnuas – that because demand for it might rise (and it was especially high in the period he looked at because of the recession), it might undermine the entire Arts Council. I kid you not: the report says of the cnuas that because it is demand-led, it “has the potential to exert limitations on the Arts Council’s ability to deliver on its programme”.

This is emphatically not a runaway gravy-train. It is a very specifically-targeted niche support for a small elite of artists

This is way over the top. The scheme is highly limited: the entire field of potential applicants is the 250 members of Aosdána and those who apply for the cnuas are means-tested. To qualify, a members’ annual income must be less than €25,770. Typically, about 150-160 artists qualify. The cnuas itself is set at a specific level, currently €17,180 per annum. This is emphatically not a runaway gravy-train. It is a very specifically-targeted niche support for a small elite of artists who have been judged by their peers to be Ireland’s finest.

The real danger, however, is the second ground for the economist’s hostility to the cnuas. And here the report collapses into nonsense. On the one hand, as quoted already, it says the level of artistic and creative activity attributable to this grant “is not measurable”. On the other, it goes on to recommend that “The Arts Council should consider options to measure and publicise the output of Aosdána members in receipt of the cnuas”. The unmeasurable is not only to be measured – it is to be the subject of a PR campaign.

What is both surprising and alarming is that the Arts Council seems to have accepted all this uncritically. It knows very well that the cnuas, which takes about 4 per cent of its budget, was never intended to be an input for artistic production. It was meant to be a way in which Ireland, recognising the immense benefits its artists give the nation, tries to ensure they can lead dignified lives. But the prestige of an economist is such that the Arts Council seems terrified to say this.

After the publication of the O’Hagan report, the Arts Council did not consult Aosdána between October 2015 and October 2016. At its meetings in September and October 2016, the council decided to demand proof of “productivity” from individual artists. The current requirement to be a “full-time practising artist” will change: “It was agreed to no longer use this definition. The new definition for eligible artists is ‘working artists engaged in productive practice’.” This fundamental change is aimed solely at recipients of the cnuas. Members of Aosdána are not required to be full-time artists, but to have made “an outstanding contribution to the arts in Ireland”.

The underlying mentality is exemplified by a ruling that artists who are “not advanced in years but who are temporarily incapacitated due to ill health and unable to engage in ‘productive practice’ during the course of a cnuas five-year-term would have their cnuas suspended and would not be eligible to seek financial assistance via alternative measures”. Cull the unproductive and there will be no excuses about being sick.

Every time an artist seeks a renewal of the cnuas, there will be “a full audit of the previous 5 years [sic] artistic activity”. Meanwhile, “sample audits would be undertaken annually to confirm the ‘productive practice’ of the artist”. In other words, we will hire government art inspectors (presumably at considerable expense) to check up on and evaluate the worth of the work-in-progress of our distinguished artists – even though it’s unmeasurable. Orwell meets Gogol. Perhaps the inspectors will even be called commissars.