US poet Ezra Pound, celebrated at a conference at Trinity, had close links with Irish writers and politicians and became Joyce’s unpaid agent 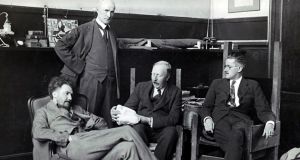 Ezra Pound, John Quinn, Ford Maddox Ford and James Joyce in Pound’s Paris studio, circa 1924; Ezra Pound in about 1967, in a restaurant, and, left, in the garden of his studio in Paris. Photograph The Poetry Collection, University of Buffalo 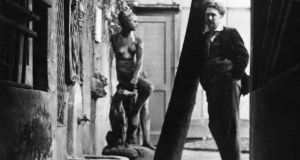 Ezra Pound in the garden outside his Paris studio in the Latin Quarter of Paris.Photograph: Topical Press Agency/Getty Images 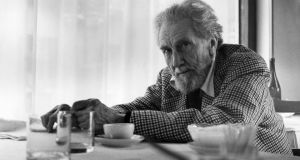 Along with James Joyce and TS Eliot, the American poet Ezra Pound (1885-1972), the subject of a conference beginning today at Trinity College, was one of the leaders of the Modernist movement in literature. He was the progenitor of Imagism (perhaps the seminal movement in the development of a modern poetic idiom in English) and is widely recognised as one of the most influential poets of the 20th century.

He worked on the Cantos, an attempt at a modern verse epic, for more than 40 years only to leave it unfinished. It has been dismissed as unreadable (certainly it is largely unread) and, like Finnegans Wake, it is one of the problematic monuments of Modernism.

He is also remembered for his support for Mussolini and fascism, and for the broadcasts he made on Radio Rome during the second World War that led to his being charged with treason and held in a Washington hospital for the criminally insane from 1945 to 1958.

Ireland was a significant presence in Pound’s life and work from early on, although he did not visit the country until 1965 when he stopped off in Dublin en route to Italy from London (where he had attended TS Eliot’s memorial service) to meet WB Yeats’s widow, Georgie. Nearly 50 years earlier he had been best man at her wedding. Her daughter Anne Yeats, who was at the meeting, recalled in 1990 that neither Georgie nor Pound spoke a single word during their time together.

Pound met Yeats in London in 1909 and quickly became part of the older poet’s inner circle.

Beginning in 1913-14, the two men spent three successive winters at Stone Cottage in Sussex with Pound acting as Yeats’s secretary (his duties included reading aloud to Yeats about witches). This was probably the high point of their literary collaboration.

In 1916 Yeats briefly considered appointing Pound manager of the Abbey Theatre (wiser counsels prevailed) and after that the two moved further apart, literally and metaphorically.

There were quarrels but no definitive break. Yeats maintained a conditional and guarded admiration for Pound’s work and Pound envied senator Yeats his status as an acknowledged legislator and “public man”,

In 1914, Yeats drew Pound’s attention to a little-known Irish writer named James Joyce and Pound wrote to Joyce asking permission to include a poem of his, I Hear an Army, in the first Imagist anthology. Joyce agreed and shortly afterwards began sending Pound other work. Pound took up the cause with enthusiasm and for the next 10 years acted as Joyce’s unpaid literary agent. Dubliners (1914), A Portrait of the Artist as a Young Man (1916) and Ulysses (1922) testify to the success of this effort.

The first World War prevented Pound and Joyce from meeting until 1920 and they never got on as well in person as they did by letter. Pound had no patience with the direction of Joyce’s work after Ulysses while Joyce, who seems never to have had much interest in Pound’s work, was alienated by Pound’s political and economic enthusiasms.

Irish writers in London
Yeats introduced Pound to a number of other Irish writers and their work (for instance, to JM Synge) and to other leading figures on the Irish scene including Maud Gonne and her daughter Iseult (with whom Pound is widely believed to have had an affair) and her son Seán MacBride.

In his early days in London Pound had also met politician and poet Desmond FitzGerald and Belfast-born poet Joseph Campbell (who told Pound that a man “can sit on a middan and dream stars”). FitzGerald was one of a group of poets who met on Thursday nights in the Tour Eiffel restaurant in Soho (other members included FS Flint and TE Hulme).

This cenacle is sometimes seen as the source of Imagism. Pound did on occasion speak of FitzGerald as an ur-Imagist but in later life he came to see him as both a man of action and an intellectual.

This was a type that strongly attracted Pound (his support for Mussolini can in part be attributed to that attraction) and he often referred to such an individual as an “entire man” or simply as a “man”. FitzGerald is evoked, although not explicitly identified, in Canto 7 (composed in 1919) as: “The live man, out of lands and prisons” – FitzGerald had been imprisoned between 1916 and 1918. Over 30 years later, in Canto 95, FitzGerald is recalled in almost identical terms: “And damn it there were men even in my time, Nicoletti, Ramperti, Desmond Fitzgerald (the one alive in 1919).”

It was through FitzGerald that, in 1921, Pound was able to meet the future president of the Free State Arthur Griffith, who was in London as head of the Irish delegation negotiating the Anglo-Irish Treaty.

Pound later recalled that meeting, which took place in Griffith’s bedroom to avoid the detectives “infesting” the hotel, as “one of the most illuminating hours” of his life. Pound attempted to convert Griffith to the Social Credit economics of Major CH Douglas and Griffith conceded that all Pound said was “perfectly true” but added that you “can’t move ’em with a cold thing like economics”. This was probably no more than a polite prevarication on Griffith’s part; Pound took it as a profound piece of political wisdom.

Censorship
Pound’s interest in Ireland continued through the 1920s and he was so concerned over the issue of censorship in the new State that in late 1928 he wrote two letters to the Irish Times about the proposed Censorship of Publications Act.

The first of these (published on November 8th) begins by asserting that: “The idiocy of humanity obviously knows no limit, but the text of your proposed Censorship Bill adds yet another clause to the axiom,” and suggests that Irish voters should “reflect on the effects of the American censorship laws before sinking to the level of their perpetrators”.

The bill, he asserts, “will permit you ‘mother Goose’ and the tracts of one or two religious organisations,” and anyone wanting “anything else will have to take the boat for the prosperous city of Liverpool”.

He closes by observing “but it is a great thing to be a Nashun wanct again”. For all his rhetorical overkill, Pound was an informed and at times an astute observer of Irish affairs.

Stephen Wilson is professor of American literature and director of an MA programme in Poetry and Poetics at the University of Coimbra, Portugal. He is a fellow of the Irish Centre for Poetry Studies.