Douze review: throwaway and superficial, but also goofy and gas 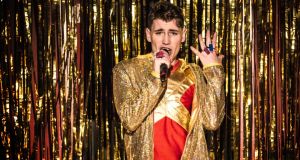 Xnthony is a pop star. Except, he isn’t. Douze is a hustings for an impending campaign to represent Ireland in the Eurovision. Except, it isn’t. But if it was, I’d say we’d be in with a good chance with ‘Glitter’’, one of the original songs the audience can “vote” for.

This ramshackle, lo-fi production skips gayly through potential Euro-hits led by Xnthony and his backing female duo. Douze scores few points with its script, which should be a cheesy goldmine of gags, but instead feels like a repetitive afterthought. But it’s all about the music, right?

And there are some genuinely hilarious moments; ‘Numbers’, the utilisation of a stepladder as a dramatic prop for a ballad, and the sheer messy shoestring nature of it all.

Douze is throwaway and superficial, but also goofy and gas. Whatever Xnthony’s motivations are, you have to admire his conviction.