Damn the Circus makes you laugh and gasp, and there’s no doubting the graft in the craft 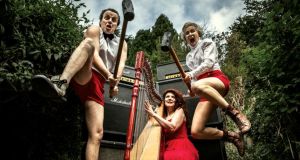 Those of us who have tried it will know that running away to join the circus isn’t all it’s cracked up to be. The three members of Tumble Circus have similar unfulfilled dreams of glamour and stardom, whether as stars of Cirque De Soleil or producers of a new money-spinning mystical collaboration with Enya. The only alternative is to turn on each other, which all three tackle with bitchy gusto. Along the way, there are some pretty fine circus skills from Tina Machina and Kenneth Fall and hilarious set-pieces, such as Ursula Burns’s erotic duet with her harp. Spurning the veneer of fake smiles for the strain of grimacing faces, the performers celebrate the honesty and effort behind their craft. They might make us laugh and gasp, but, as ever, Tumble Circus pose more universal questions about achievement and fulfilment.