Curtain call: Joe Dowling bows out of his star turn at the Guthrie Theater 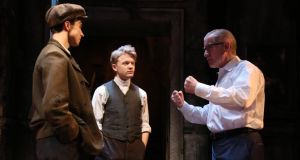 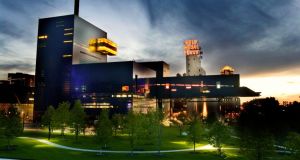 Spectacular: the Guthrie Theater, designed by the French architect Jean Nouvel, beside the Mississippi in Minneapolis. Photograph: Mark Vancleave 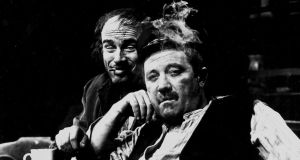 Joe Dowling is standing in front of one of the Guthrie Theater’s three stages, in Minneapolis, giving notes to Mark Benninghofen, the American actor who plays Joxer Daly for the next month in Seán O’Casey’s Juno and the Paycock. The Irish actor Stephen Brennan, dressed as Captain Boyle, is stretching on some steps nearby.

They’re about to start a technical run-through, a week from last night’s opening of a show that will bring down the curtain on Dowling’s two decades as artistic director of this centre of theatre on the banks of the Mississippi. Like the cascading river next to it, the Guthrie under Dowling has been constantly in motion.

Sitting in the auditorium, the Dubliner isn’t happy with the timing as A Nation Once Again fades out over slides showing a brief history of 20th-century Ireland, which tee up O’Casey’s tragicomedy set in 1922. He wants the incoming sound of gunfire, “not the optimism of the song” heard during the penultimate slide about the Civil War.

Directing his technicians as well as his actors, Dowling’s attention to detail is meticulous and in line with the focus of those around him.

You need only walk through the costume shop, with its sprung floor, and the naturally lit rehearsal rooms to see that the new Guthrie, built in 2006, 43 years after the theatre’s founding, was designed to bring out the best in people working here.

“When you see it on the list you will know I’m definitely leaving,” Dowling told one Guthrie board member of Juno, the 51st and final production he has directed here.

The Dubliner directed the landmark production with the late Donal McCann as the Paycock and John Kavanagh as Joxer, at the Gaiety Theatre in 1986, and had felt he had nothing new to say about the play until he “got a lot of pressure from different people”.

He was convinced to take it on again by being able to cast Anita Reeves as Juno and to work with Brennan and the designer Frank Hallinan Flood.

“That all added up to me to a kind of wonderful linking of the different worlds I have been part of for so long,” he says.

Dowling is wrapping up his time in Minnesota by producing two modern classics, one Irish, one American.

On the 1,100-seat Wurtele thrust stage Arthur Miller’s The Crucible has been running as Juno has been rehearsing.

The political parable was personal for Dowling. He premiered Miller’s penultimate play, Resurrection Blues, in 2002, with the playwright spending a summer here. “He was a very special part of my being here,” he says. “The Crucible is sort of a homage to him.”

There have been many highlights for Dowling at the Guthrie: premieres of plays by John Guare and Marsha Norman and celebrations of Tony Kushner and Christopher Hampton that devoted all three stages to their work.

He wanted to do the show again but couldn’t break the memory of McCann’s portrayal, so, after 21 years away from acting, he decided to play the role himself. His original idea was six nights in the Guthrie’s 200-seat studio; it turned into five weeks in the 700-seat McGuire proscenium-stage theatre.

“It was quite funny, because in all the previews a number of local actors were coming in, saying, ‘Okay, let’s see if he can actually act.’ It was terrifying. It was a huge risk. I’m glad I did it, but I don’t think I would want to do it again. I would certainly want to act again,” he says.

The new Guthrie is Dowling’s finest production. It must be one of the most spectacular theatre buildings constructed anywhere in the world in the past quarter-century. In 1998 he told the board that it had a choice if it wanted to meet the goal of the organisation’s founders, including the Irish director Tyrone Guthrie, of shifting the paradigm of American theatre from the commercial centre of New York: “limit the artistic ambitions or expand the facility.” A new Guthrie, costing $125 million, was conceived.

“Here we are in the middle of the country, equidistant from the west coast and the east coast, and therefore in the centre, so why not create a centre that could actually reflect the kind of original ambitions of the founders and take them into the 21st century?” says Dowling.

He thought that the French architect Jean Nouvel was making no sense when he said he wanted the new theatre to be 15m in the air. A view of the river was vital. “The Mississippi is America!” Nouvel declared.

It makes sense now. Patrons take a long escalator ride to a fourth-floor lobby where congregants of the three theatres meet in a public space. From there is the “endless bridge”, a 50m cantilever that stretches out to tiered outdoor seating facing a sole performer: the Mississippi.

It was perhaps brave to relocate to a derelict, dangerous part of the city best known for its old mills and parking lots for the Metrodome stadium, but the Guthrie has turned the area into a new hub of urban life.

“Coming from Dublin, and that the Abbey should always have been built right on the Liffey, it struck me as being the ideal thing,” he says.

The Guthrie’s annual budget is about €24 million, compared with about €12 million that the Abbey spent in 2012, the most recent year for which it has published its accounts. The Guthrie raised $90 million – €82 million – privately in the noughties for the new building, reflecting the United States’ low-tax, high-philanthropy culture. Dowling fought political battles, notably with Minnesota’s then governor, the former wrestler Jesse Ventura, for another $25 million in public funds.

This raises the question of whether Dowling might have won another long-running battle on the Abbey’s relocation long ago, had he not gone stateside in 1995. “The Abbey’s political battles were always going to be much more difficult in terms of where they are to where they want to be,” he says.

He laments the missed opportunity to create a similar artistic infrastructure in Ireland during the Celtic Tiger era. “It is shameful how that was misused. To my mind it is one of the great tragedies of modern Ireland that the then governments did not see the value of utilising that money for infrastructure,” he says.

In contrast to the Irish, Minnesotans, with their Scandinavian heritage, have a tradition of giving back to the community. “That sense of community, I don’t get that in Dublin; it isn’t there,” he says.

Fights at the Abbey

When Mac Conghail stands down, in December 2016, Dowling sees an opportunity for the Abbey to appoint someone as young as he was when he landed the job. “I genuinely hope that there will be somebody whose ideas will radicalise” the Abbey, he says.

He is terribly disappointed that the Peacock, the Abbey’s studio stage, has not been used more like it was when he was running it, in the mid 1970s; he says the space was filled from morning to midnight and used as a training ground for new talent. “When it has been at its best is when it has been anarchic. Whoever takes it over next year has to rethink the Peacock,” he says.

The Guthrie lives by a mission statement that appears at the top of each board-meeting agenda, as a constant reminder of its purpose: to be an American centre for theatre performance, production, education and professional training and, by presenting both classical literature and new work from diverse cultures, to illuminate the common humanity connecting Minnesota to the people of the world.

“Where the Abbey is going next is going to depend to a very large extent on what the definition of its mission in a different Ireland is. I don’t know that it has ever really defined itself in that way,” he says.

After the Guthrie, Dowling, who is 67 in September, will split his time between Minneapolis, New York – where he and his wife, Siobhán Cleary, have a home – and Dublin, where he is talking to Mac Conghail and Michael Colgan about directing at both the Abbey and the Gate Theatre.

Would he love to go back to the Abbey, even for a short period? “The Abbey will make their own decisions,” he says. “When I leave here on June 30th I don’t feel I have finished my career.”