Culture Shock: Tina Fey and Amy Poehler walk into a bar. Fill in the punchline yourself 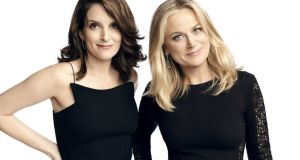 Funnily enough, no one knows what makes us laugh.

Oh, sure, you know what makes you laugh: a chicken crossing the road. Somebody slipping on a banana skin. Somebody narrowly avoiding slipping on a banana skin, straightening himself up, then falling down a manhole. Jonathan Swift advising us to eat our children. A guy walking into a bar. A seal walking into a club. Bill Hicks advising us to cast our terminally ill relatives as stuntpeople in the movies. Tommy Tiernan. Mario Rosenstock’s impersonation of Vincent Browne. Tina Fey and Amy Poehler. Louis CK. Sarah Silverman. Brendan O’Carroll. Maeve Higgins. Anybody but Tommy Tiernan. The Simpsons before 1997.

But the act of laughing itself is still a mystery. It isn’t always an expression of happiness or amusement. It can be nervous or hysterical. Contagious or therapeutic. Evil or polite. There are countless theories about laughter but no conclusion, like a shaggy-dog set-up that never arrives at a punchline. “Funny?” asks Joe Pesci’s unhinged joker in Goodfellas. “Funny how?” Why would any sane person make a career out of it?

“Laughter’s infectious,” says an entertainment agent in Death of a Comedian, the new play by the Northern Irish writer Owen McCafferty, when he’s asked why he got into the business. “Single saleable units.” The title of McCafferty’s play nods at Arthur Miller’s drama about another peddler of saleable units. But it more clearly resembles the Faust legend, where an upstart, wildly splenetic political comedian who craves “success” forges a deal with the Mephistophelian agent, and quickly sands down his edges.

As he moves from calling all politicians c***s in dark, drunken comedy cellars, to safe observational routines about domestic strife and charity support, towards television panel shows and arena gigs at the Apollo, his death is really one of the soul.

The play’s most wicked joke is that this is the sad fate of almost all successful stand-up comedians. Look at the careers of Steve Martin, Jim Carrey or Adam Sandler (whose movie Funny People recognised his own career arc with a heavy heart). You can die onstage or you can die inside.

It’s a restless business, too. What’s funny now won’t be funny tomorrow. The brick wall and spotlight “authenticity” of 1980s stand-up is a cliche for the ceaselessly ironic comedians of the 1990s. That seems passe by the innovative and slicker packages of the aughties, now outpaced by the virality of comedy in a decade of tweeted one-liners and YouTubed monologues. The saleable units of laughs are now available for free.

In some ways this has made stand-up much more powerful, where the evocatively named Russell Brand can bring out a book in time for the Christmas market and still be discussed, with a straight face, as an anti-capitalist revolutionary. On the other hand this really could be the death of comedy. Stand-up is everywhere, and at the same time it is losing its space.

Recently forced to cancel an arena performance in New York by the weather, Louis CK wrote a fan email that rhapsodised his 30 years of playing in small clubs. The club, he wrote, is “where comedy is born and where comedy, stand-up comedy, truly lives”, a place where people gather, “drinking themselves a bit numb and listening to each other say wicked, crazy, silly, wrongful, delightful, upside-down, careless, offensive, disgusting, whimsical things”.

He didn’t need to point out, as his fellow comic Chris Rock recently did, that this protected space is under considerable threat – from surreptitious smartphones, from sober, killjoy scrutiny, from success.

After Death of a Comedian we’ll see a rehearsed reading of The Big Girl, a new play by the accidental controversialist Hugh Travers at the New Theatre in Dublin. Based on Antigone, it features a politician’s daughter and stand-up comedian using her abortion for dark material. Meanwhile, the intentional controversialist, politician’s son and stand-up comedian David McSavage is making his stage debut, in Martin McDonagh’s The Pillowman, a play about a man under investigation for expressing horrible ideas.

And somewhere in the pipeline is an arch new piece from the theatremaker Martin McSharry called Marky McSherry Tells It Like It Is! In the showing I attended McSharry issued a sly disclaimer: “If it’s funny, it’s comedy. If it’s not funny, it’s performance art.”

But that distinction has never been stable. McSharry used his faltering, failing comedian alter ego to inject real confessional detail – he is a 36-year-old with Parkinson’s disease – while transforming stand-up cliches into much more disconcerting inquiries into mortality: “How much time do we have left?”

Nobody knows what it’s like to die, but everyone knows, with fear and fascination, what it is to die onstage.

You have to laugh.