Culture Shock: The trouble with memories

Simon McBurney, Robert Lepage and Brian Friel all know that, whether they escape us, prove false or exert a destructive hold, memories always keep us in their grip 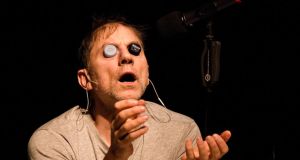 Simon McBurney in The Encounter: with more documentation than ever, and much less reflection, our own memories get no sharper. Photograph: Francisco Peralta Torrejón

A couple of weeks ago, at Edinburgh International Festival, the writer and performer Simon McBurney arrived on stage and fell into a deep preoccupation with his mobile phone. While asking us to turn off our own devices, he began absently scrolling through photographs of his young daughter, and remarked that more had been taken of her in two weeks than had been taken of him during his entire childhood. More photographs of her existed on one page than of his own father’s entire existence.

It was a breezy and faintly troubling introduction to his latest and fascinating show for Complicite, The Encounter, which used an array of new devices – the most prominent being an onstage binaural microphone in the totemic shape of a human head – to engage with age-old artistic concerns, such as: how does a storyteller get inside someone’s mind?

Here was an early hook. In an age of digital devices with near-limitless memories we’ve become profligate with recording. But with more documentation than ever before, and much less reflection, our own memories get no sharper.

In the same space, in another show, Robert LePpage used his phone like a man who had mastered the past. Swiping and pinching at its screen, he manipulated a photographic slideshow of his father’s military service in Quebec, during the extraordinary 887, then used the camera to relay video images of intricate models of his boyhood home. But the device, he admitted, had become a crutch. Nowadays he couldn’t tell you his own phone number.

This came at an anxious juncture: Lepage had been asked to memorise a poem, Michele Lalonde’s politically impassioned Speak White, for a performance and was failing to recall a single verse. So began an artful exploration of what it is to remember, and to be remembered, at a time of simplifications, distortions and traumatic erasures.

If theatre seems more preoccupied than other art forms with the fallibility and ungovernability of memory, this may owe something to its method and nebulous residue. Performances are always acts of memory, rehearsed by its performers, recalled by its audience. If the work of Brian Friel looms large in theatre, full of unbidden, uncertain or contested images that ambush the minds of his characters, it is because, more than any other playwright, he has made memory his metier.

“When I cast my mind back to that summer of 1936,” begins the narrator of Dancing at Lughnasa, “different kinds of memories offer themselves to me.” But for all this supposed control of the caster, those memories are neither innocent nor untroubling, as difficult to command as the seemingly possessed radio set in his aunts’ Ballybeg kitchen. When vivid scenes of hope and hardship resolve finally into something like a contented haze, Michael admits that this memory “owes nothing to fact”. The past is something that can never be fully contained or easily summoned.

In the new Lyric Theatre Belfast production of Dancing at Lughnasa, directed by Annabelle Comyn, nostalgia is a complicated force, prone to halcyon-days sentimentality but better considered as the ache or pain of return. “At its heart, Dancing at Lughnasa is an internal dialogue that seeks to understand and release the past,” Comyn writes in her programme note, as though it is a purging act of therapy. “By freeing himself of the past, Michael offers other ways of looking at life and other possibilities about how to live in the future.”

That’s a persuasive reading, but it is still not how many will remember the play. Writing about the insinuation of false memories a couple of years ago, in the New York Review of Books, the late Oliver Sacks concluded: “There is, it seems, no mechanism in the mind or the brain for ensuring the truth of our recollections.” He himself had written, with great clarity, about a wartime event from his childhood that his older brother told him he had never witnessed.

The preoccupation with memories, whether they escape us, prove false or exert a destructive hold, never dims. In the Abbey’s revival of Marina Carr’s By the Bog of Cats Hester Swane wars with her neighbours over many things, but none more bitterly than the contested memory of her long absent mother, as though trying to fill a void within. In Amy Conroy’s new play, Luck Just Kissed You Hello, due to be performed at Dublin Theatre Festival, the protagonist, a transgender man thinking back to his estranged father, is frequently told, “You’re remembering it wrong,” while struggling to remember it right, to free himself and move on.

Digital technology, with all of its merciless ones and zeroes, suggests the end of that struggle, with memories that never blur, hard-proofed to settle every dispute, a black-box recorder in every pocket. But the brain resists total recall, and theatre creatively helps it fill in the gaps. “To remember everything is a form of madness,” says another character, in another Friel play, to the best of my recollection.