Circus Animals’ Desertion review: Know the dancer from the cat 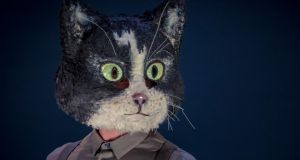 Eddie Kay in The Circus Animals’ Desertion by Brokentalkers which is running in the Samuel Beckett Theatre as part of the Dublin Theatre Festival. Photograph: Keith Dixon Photography

Whatever your feelings about the artist or the man, there’s no denying that WB Yeats was a visionary.

That he gave so unstintingly of his visions – for Ireland, for art, for unearthly realms – makes him a fascinating riddle in this bold exploration from Brokentalkers.

Directors Feidlim Cannon and Gary Keegan collaborate with choreographer Jessica Kennedy to create a piece of dance-theatre that takes up Yeats’s challenge to create new theatrical forms, while keeping a cool distance from his more septic political ideas. It’s no easy feat; to find poetry in motion, but still know the dancer from the dance.

Their cue comes from Yeats’s occult work A Vision, and an idea of spirits Dreaming Back in the afterlife to relive the most painful, intense moments of their lives.

Here, Yeats is the dreamer, appearing first as the body of performer Martin McCann, resurrected from a slab, but then splintering into a youthful alter ego who, through Saara Hurme’s lithe performance and Ger Clancy’s uncanny mask work, proves you can put an old head on young shoulders.

Brokentalkers have long taken a bracingly surreal approach to documentary theatre, and here they weave dreamlike symbols into a cloudy biography.

To describe what unfurls would be like sending dispatches from an acid trip.

On a stage watched over by musicians in cat’s heads, Yeats’s fractious childhood is lyrically evoked, and in the refuge of imagination he is paired with a dancer in a kitten head.

There is an innocence in this relationship that becomes warped by the familiar horrors of the 20th century, now depressingly resonant: allusions to genocide and fascism, a coercive eugenics lecture, and the straitjacketing ideals of “purifying” nationalism, are all presented in its darkly comic phantasmagoria.

In this thicket of symbols Yeats’s writings are sampled and repurposed, present in McCann’s affecting singing over Sean Millar’s majestically mournful music, or spun into arresting, weird images.

Many will give up trying to decode the spectacle to drift along with the production’s haunting, diaphanous quality. But finally, everything comes back to this inspiring, deluded dreamer who looms so large over Irish culture.

As visions, both stirring and troubling, disappear back into his body, Brokentalkers are artfully aware about what it means to take Yeats at his word.

These two sisters turn four and three on February 29th – or should that be 16 and 12?