Abbey archive – act one, scene one: Sexism and censorship 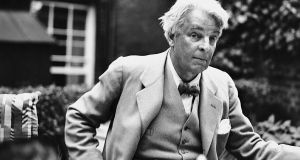 WB Yeats in 1935: Release of the books represents part of the Abbey’s contribution to the 150th anniversary of his birth

Cigarettes, censorship and sexism were at the heart of a discussion on Monday in the Abbey Theatre during the official launch of a section of the theatre’s newly digitised archive.

Seven of the National Theatre’s minute books, covering the period from 1904 to 1939, were made available online for the first time. The publication of the books, which were digitised in collaboration with NUI Galway, represents the first batch of the theatre’s archive to be made available to the general public.

The minutes, which contain notes from meetings of the theatre’s board, offer an insight into the boardroom contributions of Irish literary giants such as WB Yeats, Lady Gregory and Frank O’Connor. The release of the books represents part of the Abbey’s contribution to the 150th anniversary celebrations of WB Yeats’s birth.

Speaking at the launch, project leader Prof Patrick Lonergan from the NUIG Centre for Drama, Theatre and Performance said that the minute books are “great for scholarship but also great for gossip. The minute books have almost never been available for researchers,” he said. “I think only two people up until now have had access to them. “They are a resource that we want to make widely available.”

He added that the completed archive will be launched this time next year.

Dr Charlotte McIvor, lecturer in drama and performance at NUIG, said that the books contain valuable information for scholars and teachers. She said: “I think they are going to be very important in explaining to students the different kinds of labour involved in running a theatre.”

Dr McIvor said the books document “in minute detail” the decisions of the board right down to discussions about whether or not to allow cigarette smoking in the theatre.

“I think you could honestly take any two pages in these books and build a successful lesson around it,” she added.

Playwright and Abbey board member Thomas Kilroy said the books help illuminate the relationship between the early theatre and the changing Irish State.

He said: “One extraordinary thing which I had never heard of before which was that in 1939 Dublin Corporation tried to establish stage censorship. They assembled a number of inspectors to establish what was going on in Irish theatres.”

The inspector, he said, was charged with stamping out “objectionable” stage material. The censor’s presence was resisted by the board and he was told that he “would have to buy a ticket like everyone else” if he wanted to judge a play.

The changing involvement of women in the early Abbey’s history is another historical narrative which the minutes help to describe. The theatre has faced criticism in recent weeks over a lack of representation for female artists in its 2016 programme and according to Patricia O’Beirne, who transcribed the materials, this was an issue from the very early days of the Abbey.

Ms O’Beirne, a PHD candidate at NUIG, said that the minutes from the 1930s in particular show how the board’s attitude to female artists changed after the death of Lady Gregory. She said the atmosphere in the minutes shifted during the decade which saw Frank O’Connor appointed to the board.

She explained: “Women went out the doorway. The language they were using when they were speaking about or to the players was like they were talking to children. Frank O’Connor actually says that in the minutes. The language also becomes quite clearly sexist.”

When asked about what implications the books have for the current debate about women in theatre, Prof Lonergan replied: “I think as is always the case, history can teach us a lot about the present.”

7 Fontaines DC are reborn as punk-funk disconauts, and the results are cracking