25 years in the funny business

It’s a small, dark place, with no microphone and it’s not even in a basement – so what’s the secret to the Comedy Cellar’s success? 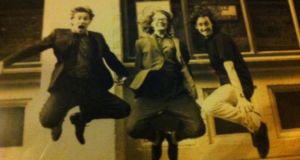 Ardal O’Hanlon, Kevin Gildea and Barry Murphy; three of the four people who launched Dublin’s Comedy Cellar at the International Bar on Wicklow Street with their act Mr Trellis. 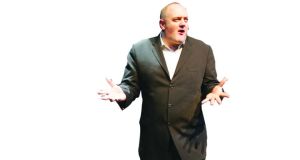 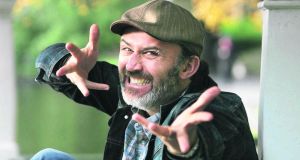 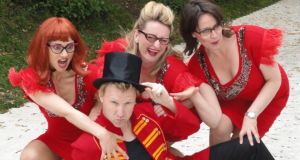 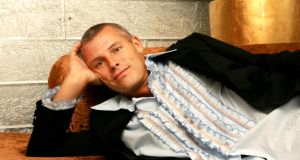 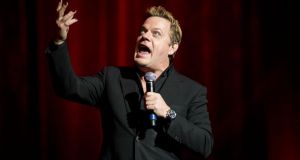 There was the night when a nervous Dylan Moran did his first ever comedy gig (a five-minute open-spot that didn’t go that well); the night Eddie Izzard turned up to do an unannounced spot and was charged in by the person on the door who didn’t recognise him; and the time Tommy Tiernan was near-sick with the nerves waiting to tread the boards of the legendary venue.

Expect all these stories – along with the unprintable ones – to be recalled when a bunch of old lags and fresh-faced newcomers from the Irish comedy world congregate in Vicar Street tomorrow for a show to mark the 25th anniversary of Dublin’s Comedy Cellar.

From Wicklow Street to the world, the Cellar has been the comedy nursery that nurtured and developed the biggest names in Irish comedy. Barry Murphy, Ardal O’Hanlon, Dylan Moran, Dara O’Briain, Jason Byrne, David O’Doherty and others have all earned their chops on the first floor of the International Bar on Wicklow Street. To this day, the Cellar holds an unlikely world record in producing the most ever nominees and winners of the main Edinburgh Festival comedy prize.

The club first appeared in 1988 when four bored, disillusioned and fairly unemployable DCU students were looking for a city centre venue to host the sort of “alternative” comedy that had taken a grip in the UK. Barry Murphy, Ardal O’Hanlon, Kevin Gildea and Dermot Carmody billed themselves as “Mr Trellis – The Mormon” (a Flann O’Brien reference).

For a generation more used to today’s bespoke clubs, the Cellar is a ramshackle throwback to alternative comedy’s roots. It only fits 60 people and there are no microphones, lighting or dressing rooms.

Three men and a dog would be a gross exaggeration of the Cellar’s early audiences but word soon spread and the venue became the place for those interested in trying out something new. Performers such as Alex Lyons, Joe Rooney, Karl McDermott and Paul Tylak helped fill out the bill while early audience members watching and wondering at this new experiment in comedy included Moran, O’Doherty and Andrew Maxwell (the first two later won Perrier awards and Maxwellwas twice nominated for a Perrier).

Another early spectator-turned-performer, Jason Byrne, went on attract more ticket sales than anyone else in the history of the Edinburgh Festival.

When, in 1991, Mr Trellis went to perform at the Edinburgh Fringe, they shared a one-hour show with an up and coming English comic called Eddie Izzard, who came over to perform at the Dublin venue he had heard so much about.

“I had worked in Dublin as a street performer during the 1988 Millennium celebrations and noticed that there really wasn’t that much happening in terms of stand-up so it was great to hear from Trellis about this new club they had in the International Bar,” says Izzard.

“As a comedy act, Mr Trellis blew me away. They had amazing stuff. I’ll always remember Barry Murphy walking on to the stage and just singing that Wonderful Life song and then walking off again. It was stupidly beautiful and very ballsy, a very Barry thing to do.

“Whenever I was over in Dublin subsequently I would always hook up with Barry and it was such a pleasure to play in the Comedy Cellar. I remember being on one particular night and just before me there had been this open-mic spot with this young man doing his first ever comedy gig. That was Dylan Moran.

“The comedy was just sitting there in the country waiting for a platform such as the Cellar,” says Izzard. “There’s just a gut instinct for what’s good there. Some really f**king funny people have come through that club.”

For years the only gig in town, the Cellar went on to attract the likes of Jason Byrne, Des Bishop, The Nualas, PJ Gallagher, Neil Delamere and Maeve Higgins. Such is the demand it created, and the name it got for breaking high-quality acts, there is now a comedy gig every night of the week in the Cellar but only Wednesday night is allowed call itself the Comedy Cellar.

Ian Coppinger, who began at the Cellar as part of the double act Fat Man’s Picnic Basket, has gone on to become one of the world’s leading comedy improv performers and regularly appears at venues around the world with Paul Merton.

He talks about the shock on the faces of the comedy industry types who have visited the club where so many stellar names started out.

“People just can’t believe what they’re seeing when they walk in for the first time,” says Coppinger. “Everyone in the comedy industry has heard about the Cellar and I think they’re expecting some big, fancy club with proper lighting and an actual dressing room. But what they get is this tiny room where the audience sits on the stage and floor.

“There is no microphone – and never has been – and there’s nowhere for the performer to go before or after the show. What people tend to say is ‘this shouldn’t work but it does’.”

“Yes, there’s no PA system and all of that but that hardly matters to a good comedian,” says Izzard. “I love the place and whenever I’m back in Dublin I love going in and seeing if I can do a spot. It’s a great, great club.”

Almost anywhere you look in the comedy world there is a direct line back to the Cellar: from Father Ted to Après Match to Mock The Week and Black Books to Jason Byrne’s upcoming primetime BBC1 sitcom.

The Cellar still routinely turns down many lucrative sponsorship deals and remains as rough and ready – and welcoming of the bizarre and experimental – as it was that first Wednesday night in 1988.

Founding fathers Murphy, O’Hanlon, Gildea and Carmody still keep a watchful eye over the place and all four still perform there.

“Iconic”, “legendary”, “world famous”, “the spiritual home of Irish comedy” – they call the Cellar many things but it is none of the above. It’s loud, cramped, noisy and filthy but always exhilarating. There really is nowhere quite like it.

25 Years Of The Comedy Cellar is at Vicar Street, Dublin, tomorrow.