Sometimes, even on Broadway, words speak louder than actions 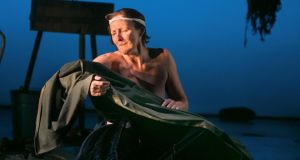 Can there be such a thing as too much artistic invention? Emerging on Monday from the opening night of Colm Tóibín’s The Testament of Mary at the Walter Kerr Theatre on Broadway, I had the very unusual sensation of having been subjected to an excess of theatrical brilliance. Fiona Shaw’s performance in Deborah Warner’s production is Olympic gold medal acting, stupendous in its combination of fine technique and raw power. The experience is not so much compelling as coercive: you dare not take your eyes off her. Yet all that energy of performance and direction often seems to come from a determination not to explore the emotion of the text, but to avoid it.

The play’s publicity emphasised its status as a “new work for Broadway”. This will come as a surprise to those who saw Marie Mullen’s searing performance in Testament (as it was then called) in Garry Hynes’s production at Dublin Theatre Festival in 2011. Yet the idea that this is now a new work makes some sense.

The text, although changed in some important ways, is largely recognisable. But as a piece of theatre, the intention and effect could hardly be more different. The Hynes-Mullen version was direct, rooted, earthy and, in the end, painfully tender in its confrontation with death and loss. The Warner-Shaw version is baroque, elaborate, epic and, in the end, painfully evasive in its deliberate withholding of tenderness.

While Mullen worked to make an icon real, the artifice in Warner’s Broadway version is almost literally in your face. The audience begins by walking through Tom Pye’s complex set, flanked by a tap and pool, inhabited by a live vulture, strewn with barbed wire, outsize nails and amphorae and dominated by a torture wheel on a pole, topped by a raven: an image directly from Hieronymus Bosch. Mel Mercier’s richly eerie music fills the atmosphere. Shaw walks through the crowd and enters a large Perspex box full of devotional candles. She adopts the pose of a Renaissance Madonna while audience members take photographs on their mobile phones.

This image is created, of course, only to be shattered. The box is taken away, the stage is cleared and the Virgin who returns is a dishevelled middle-aged woman in contemporary clothes. She smokes and drinks. She speaks in a bitter, ironic, darkly humorous Corkonian tone. She mimics her minders who come to get her recollections of her son, giving them the hectoring and self-righteous tones of Belfast zealots. She is utterly self-aware, never lost in the moment, always performing.

Shaw’s highly strung presence is matched by the frantic inventiveness of the action. I’ve rarely seen a piece of theatre so relentlessly worked. There is not a single moment when Tóibín’s severely elegant text is allowed to exist on its own, as an unaccompanied voice. It is shadowed at every point by a visual and physical language of extraordinary density, an expressionistic ballet of gestures, movements, rages and exasperations.

Costumes and props – physical things – dominate words. Shaw is continually robing and disrobing, moving through numerous stages from elaborate, multilayered dress to complete nakedness. Tables and chairs are overturned and set right. Manuscripts are read and scattered. The tap and pool, the flowing and staunching of water, create the arena of miracles and dreams. A heavy wooden ladder and rolls of barbed war create that of torture and death. No passage of words is allowed to be without its physical correlative.

This is engrossing. I would happily watch Shaw’s magnetic performance for three hours rather than 90 minutes. And there are times when the physical play is perfectly in sync with the verbal one: Shaw’s use of cloth to change her appearance and suggest other characters, such as Jesus or Lazarus, can be breathtaking. But there are times, too, when the action seems to lose all contact with the words – it’s not clear why Shaw’s naked pool plunge is necessary. More generally, the relentless need to be always doing something seems to deny the possibility that there might be some kind of stillness at the heart of the drama.

The unremitting busyness seems to come from a quite reasonable fear of surrender to a soft religiosity, a wariness of the emotional power of a story that is so deeply embedded in the culture. But Warner and Shaw seem so terrified of any kind of sentimentality that they leave no room for the sentiment of the piece. Tóibín’s text is indeed trying to have it both ways; to tap into a sense of religious yearning without the necessity for religious belief. Warner and Shaw’s vision is more one-eyed. It does not wish to see the aura of aching that surrounds the play’s scepticism. Oddly, they seem to agree with the small band of protesters who gathered outside on Monday night that the play is simply an attack on religious mystery.

But it isn’t. One of the most beautiful parts of the Dublin version was a passage in which Mary confesses that she has been to worship at the temple of Artemis. The idea is shocking, but it is also utterly poignant: even the Blessed Virgin needs a blessed virgin to pray to. The moment is cut on Broadway. Shaw’s ferocious, unstoppable, thrillingly aggressive Mary is not allowed to yearn for such consolation.

1:58 Children record their own messages of love at The Ark in Dublin