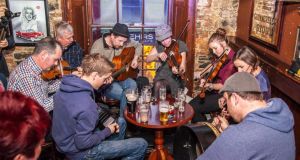 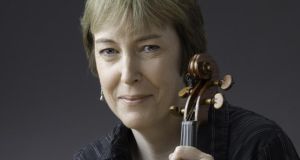 Liz Carroll: ‘It’s really flattering that Sligo Live would go as far as Chicago when they were thinking of who they would invite over this year’ 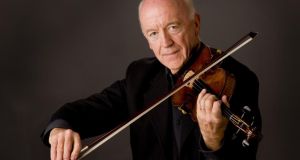 Traditional music is showing a remarkable resistance to the recession. Albums are tumbling from mixing desks, live (though largely unpaid) sessions are thriving, and theatre concerts feature new collaborations, albeit with the same challenges facing many hard-pressed punters whose social diaries are more limited than they might have been a few years ago. This year’s ninth Sligo Live festival continues the Gathering theme with the return of a flock of Irish-American musicians who bring a fresh approach to the music.

Baltimore-born Jesse Smith, Brooklynite Tony DeMarco and Chicago’s Liz Carroll are just three of the musicians who will bring fiddles and bows to Sligo Live this bank holiday weekend. Carroll, who won TG4’s Composer of the Year Award in 2010, has breathed fresh life into old tunes and composed almost 200 of her own over the years.

After a pair of highly successful collaborative recordings with guitarist John Doyle, garnering a Grammy nomination in 2009, and the publication of her own tune book, Collected, Carroll will next month release her first solo album in 11 years, On the Offbeat.

Sligo Live cuts to the heart of Carroll’s influences. “Although most people think of New York when it comes to Irish-American musicians, I come from a town that was very influenced by the big three [Sligo] fiddlers: Michael Coleman, Paddy Killoran and James Morrison, ” she says.

Johnny McGreevy, a fellow Chicago fiddler, who had a reputation for setting tunes on fire, breathed Sligo music and was a constant presence in Carroll’s musical life.

“It’s really flattering that Sligo Live would go as far as Chicago when they were thinking of who they would invite over this year,” says Carroll. “The truth is, that wherever I go, whenever I’m travelling, I have lots of music, but it’s the Irish music that I’m constantly listening to. It’s constantly in my head. It really does mean a lot to me. I haven’t strayed from it at all.”

The recent success of the Derry and Cavan Fleadhs struck a chord with Carroll, a professional musician who felt at home in the street sessions and on the pub trail.

Gone are the days when the fleadh was the sole provenance of Comhaltas Ceoltóirí Éireann members. “I really like the fact that there are these places for people who actually play the music for a living,” Carroll says. “It’s so great to see and hear everyone play together: from the youngest musicians to Sharon Shannon and Steve Cooney. ”

The experimental strain
Carroll points to the large number of fresh ensembles pushing at the boundaries of the tradition as a force for good. Groups such as This Is How We Fly, Ensemble Ériu and others, with their appetite for experimentation, are “all good”, she says.

“When you listen to music that adds a world sound, such as African drumming, I don’t think it ever hurts the music. I get a real kick out of playing Cape Breton music, for example, but I equally love returning to Irish music. But really, I say: bring it on, keep mixing it up. It’s just ever- expanding.”

It’s not just the music that makes it way across international borders. Musical instruments do too, and Sligo fiddler Seamus McGuire has a fiddle with a backstory.

When McGuire was a young boy, he was invited to play a few tunes for some residents of a Sligo nursing home. One of the people he played for was Tom Gannon from Achonry, Co Sligo, who had lived much of his adult life in New York. There he recorded with the legendary Sligo fiddler Michael Coleman, during the 1920s and 1930s. The Contradiction Reel and The Prohibition Reel feature in their old recordings. It was a golden age for traditional music in the US, as musicians encountered the cosmopolitan influences of jazz, vaudeville, gospel, blues and popular music from across the globe in the Big Apple melting pot.

“Philip O’Beirne was the father of Lad O’Beirne, a renowned fiddler in his own right,” says McGuire, “and he taught Michael Coleman and Tom Gannon, among others. All of the recordings that these musicians made found their way back to Ireland and were hugely popular here. When Tom brought his fiddle back to Ireland, he told me how he had played it with Michael Coleman on all those recordings.”

Gannon bequeathed his fiddle to Lad’s brother, Dick O’Beirne, and subsequently it made its way into McGuire’s ownership. A recent restoration by Co Down luthier Peter Boardman led to the discovery that this fiddle is a 1910 German copy of a Maggini fiddle. Giovanni Maggini was a renowned 16th-century violin maker whose distinctive features were a double purfling (the narrow decorative edge on the top side of the fiddle) and an additional twirl in the scroll at the top of the fiddle. Maggini fiddles are also a centimetre or two longer than a standard fiddle.

Coleman’s Call
McGuire is relishing the prospect of reviving those beloved Coleman and Gannon duets with his brother Manus at Sligo Live’s Coleman’s Call concert on Friday. The provenance and life story of his newly rejuvenated instrument, along with its rich, deep, viola-like tone, link McGuire right back to the fiddle masters of a century ago.

“I’m looking forward to playing those reels on it, and slow airs that might benefit from the deeper sound,” he says. “It’s just lovely to have the chance to play the same tunes now with Manus, my brother, that would have been played 91 years ago by Tom Gannon and Michael Coleman.”


BANK HOLIDAY BASHES: THE BEST OF THE WEEKEND FESTIVALS

Guinness Cork Jazz Festival
The remit goes well beyond jazz, as the likes of Chic and Primal Scream on its roster will attest. If it’s jazz you want, though, Sunday night’s double-header featuring Snarky Puppy and the Mingus Big Band has to be the pick of the bunch. guinnessjazzfestival.com

Hunters Moon Festival
Hunters Moon, which takes over Carrick-on-Shannon this weekend, has one of the most eclectic line-ups of any festival. Musical highlights include New York drone kingpin Rhys Chatham, lo-fi specialists Zomes and local hero Jennifer Walshe. huntersmoonfestival.com

Beatyard
This Bodytonic initiative sprawls through most of October. Pick of the bunch this weekend are Sam Amidon in Whelan’s on Friday, Efterklang in the Button Factory on Saturday, and Hot 8 Brass Band in the Sugar Club on Sunday. the-beatyard.com

Belfast Festival at Queen’s
Choice theatrical offerings in Belfast this weekend include The Conquest of Happiness, Rhinoceros and Bullet Catch. belfastfestival.com