Screen cinema in Dublin to close after 35 years 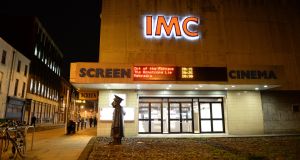 The Screen cinema, on the corner of Hawkins Street and Townsend Street. Its bronze usher statue has already been removed. Photograph: Dara Mac Dónaill

Dublin’s Screen cinema, which has operated on the corner of Hawkins Street and Townsend Street for more than 30 years, is to shut down in a week.

The cinema’s parent company IMC last year said it intended to sell the cinema because of falling attendances.

Siptu, the union representing employees of the cinema, has confirmed that staff were told last October they would be offered a redundancy settlement or a transfer to the Savoy cinema, also owned by IMC, on O’Connell Street.

However, Siptu representative Graham Macken said that last Friday the offer of a redundancy payment was withdrawn. It is understood that staff have been told the cinema will stop showing films next weekend and they will be transferred to the Savoy, without the option of accepting a redundancy package, the following Monday, February 29th.

Just four staff, three full-time and one working between the Screen and the Savoy, remain at the cinema. The bronze usher statue which stood on the raised forecourt in front of the cinema was removed earlier this week. The distinctive neon “Screen” sign was removed two years ago, and replaced with an IMC sign.

IMC said it had no one available to answer queries yesterday.

The cinema has operated as the Screen since 1980, but the history of cinema at the site stretches back almost 80 years. The Regal, also known as the Regal Rooms, opened on Hawkins Street in 1938 and operated until 1962 when it was demolished as part of a large redevelopment scheme which resulted in the construction of Hawkins House, now the Department of Health.