Don’t knock it – it’s part of Dublin’s history. But is the knocker on the door of No 7 Eccles Street, now in the James Joyce Centre, the real Joycean deal? 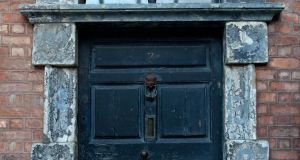 You never know what you’re going to meet when you’re out without your gun. So it was when, in Manhattan a few years ago, I met Fred Seiden and his knocker. Except that it wasn’t his.

As a keen young tourist, he arrived in Dublin in 1966, made straight for Number 7 Eccles Street where Leopold and Molly Bloom once lived, though in a virtual sort of way. What he found was that the most famous house in literary history was falling down and so – put your hands over your ears if you don’t want to be an accessory after the crime – Seiden wrenched the knocker from the door and took it all the way back to Manhattan, believing he was saving at least one part of the house from demolition.

The knocker sat accusingly on the NYC café table while we both looked down at it.

“But I saved it,” replied Seiden.

There are two versions of the truth. He was gobsmacked when I told him that yes, the house had been pulled down but that the door had been saved and placed in the Bailey Pub in Dublin before being moved to the James Joyce Centre, where it now enjoys the status of a shrine to which Joyceans come to worship.

“And that door,” I told Seiden, “has its knocker on. So this one,” I
announced to anyone in Manhattan who cared to listen, “is an imposter”.

Back in Dublin, I had a good look at the door and saw that, from marks on it, there had been other knockers. Thus I returned, the following year, to Manhattan to draw around Seiden’s knocker and try to match it in Dublin.

The Joyce scholars weren’t terribly impressed. Austin Briggs of Hamilton College NY said he must have seen the door before the Eccles Street house was demolished but felt sure the knocker displayed in the centre was not the one he’d seen.

The centre itself revealed that “a lady gave us one only last year”. Three knockers – how Molly would have loved that.

Then Joycean supremo David Norris revealed that he knows that lady: “It’s Mary Maher, one-time Women’s Editor of The Irish Times.” And yes, there’s her knocker in a glass case and no, she can’t reveal who gave it to her.

But now a new claimant has entered the arena. Prof Ian Gunn, of Edinburgh College of Art, has done further research and is convinced, he tells me, that Fred Seiden’s “is if not the only, then certainly the last door knocker of Number 7 Eccles Street”.

Seiden, for his part, is happy to return his trophy to Dublin and at this year’s Bloomsday celebrations will formally return the knocker to its rightful home at the James Joyce Centre, where it can vie for pride of place with the other two. A trinity holier than that you won’t find anywhere else.

A visit to the James Joyce Centre is high on the list of things to do in Dublin and every day you can see visitors from the US, Japan and, indeed, Ireland reverently stroking the current knocker, convinced it’s the original one.

On the other hand, so what if it isn’t? We’ve managed to cope with the discovery that St Patrick was a fictitious person. But how awful it would be to learn that, when it comes to the door knocker of Number 7 Eccles Street, we’ve all been rubbing the wrong relic.